Would you convert your bike to an e-bike with the Livall PikaBoost? Plus more tech news from Rapha, Brompton, Selle Italia, Zefal, MAAP & more 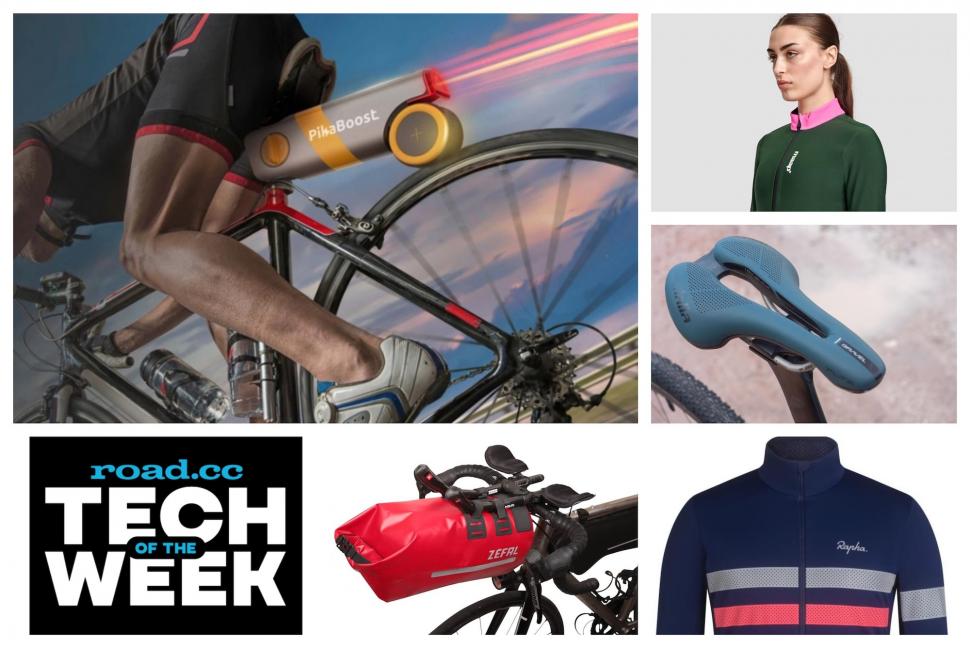 We’ve got a diverse Tech of the Week for you today – there’s fun for all the family with new clothing from Rapha and MAAP, some crazy gravel wheels from Syncros, and an NFT-validated carbon fibre bike which has us scratching our heads.

We’re starting, though, with an e-bike conversion kit that has smashed its crowdfunding target within days…

Would you convert your bike to an e-bike with the Livall PikaBoost?

The Livall PikaBoost, which promises to convert any bike into an e-bike in 30 seconds, has smashed its Kickstarter target, achieving 2,600% of its funding goal with over a month remaining. 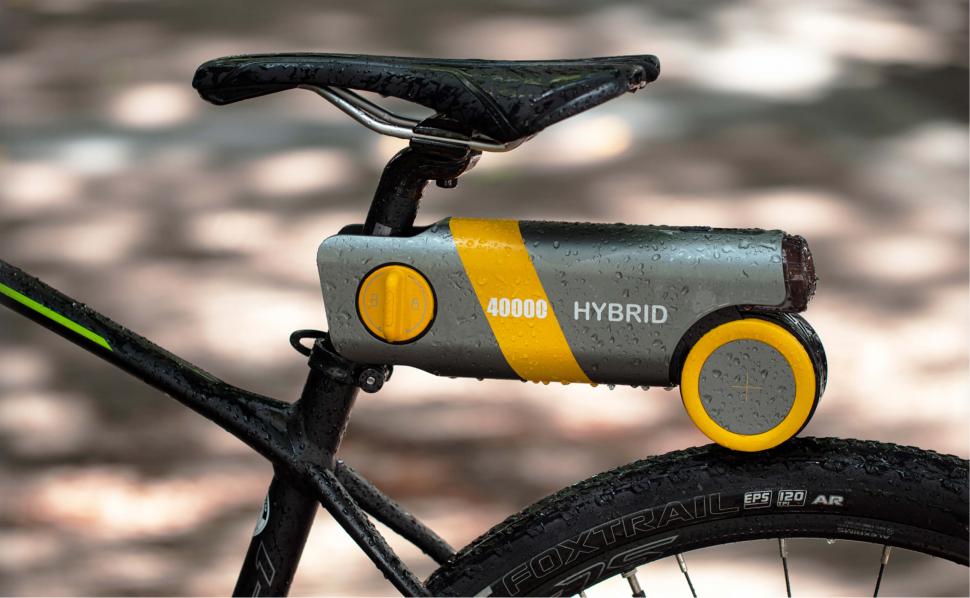 The PikaBoost is an integrated design with a 234Wh battery, 250W motor and controller contained in a 3kg unit. It mounts tool-free to your bike’s seat post and provides drive via a wheel that runs on the rear tyre.

“Our team has put a lot of effort into making the PikaBoost ride-ability on all terrains better,” says Livall. “This includes integrating a self-locking mechanism to avoid loosening due to vibration, and an elastic mechanism to avoid minor laxity that could cause the product to fall off.

“With the built-in two-axis linear Hall sensor, gyroscope, accelerometer and PikaBoost’s exclusive attitude algorithm, under the control of MCU [microcontroller unit], PikaBoost can detect the speed and attitude of the bicycle in real time, judge whether it is cycling uphill, downhill or on the flat road, and whether there is a trend of acceleration or deceleration, and dynamically adjust the output power of the motor for speed matching, so as to provide a smooth transition when the speed changes or keep the bike at a constant riding speed.”

Livall says that the PikaBoost has a range of up to 18 miles in full electric assistance mode – there are three modes – although you can buy an extra battery compartment with spare batteries to double the range.

Will the design eat through rear tyres? Livall says that the wear caused by the PikaBoost’s wheel is less than that caused by the tyre’s contact with the road. Obviously, as the tyre still contacts the road it can therefore be expected to accelerate tyre wear.

And is it legal?

“We will strictly adhere to the legal regulations while we simplify everything for you,” says Livall. “You can select the region you’re in and PikaBoost will auto-adapt the maximum speed of the assistance.”

It sounds like you could override that, though. The PikaBoost app allows you to set the maximum speed yourself up to 21mph.

It’s hardly the most subtle of designs but what do you think? 1,700 people have already backed the project on Kickstarter.

Livall PikaBoost will retail at US$599 (about £510) although you can be in line for one by pledging as little as US$299 (about £255) on Kickstarter. As we always point out with anything to do with crowdfunding, rewards – including finished products – aren’t guaranteed.

Rapha – which must be due some sort of award for appearing in virtually every Tech of the Week – has introduced a new Brevet Insulated Long Sleeve Gore-Tex Infinium Jersey that’s designed for long-distance riders. 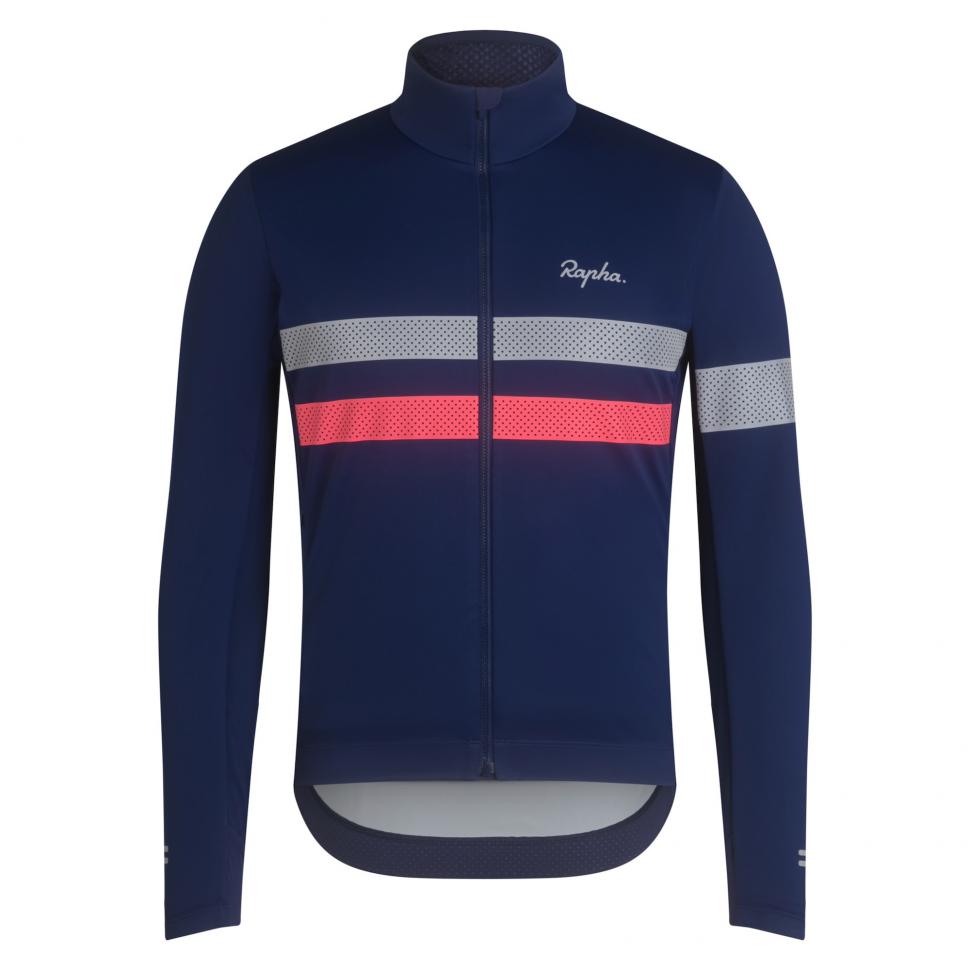 Check out all of our jacket reviews

The Gore-Tex Infinium fabric is designed to be windproof and breathable, and it’s water-resistant rather than waterproof. You can get the full story from Gore over here. 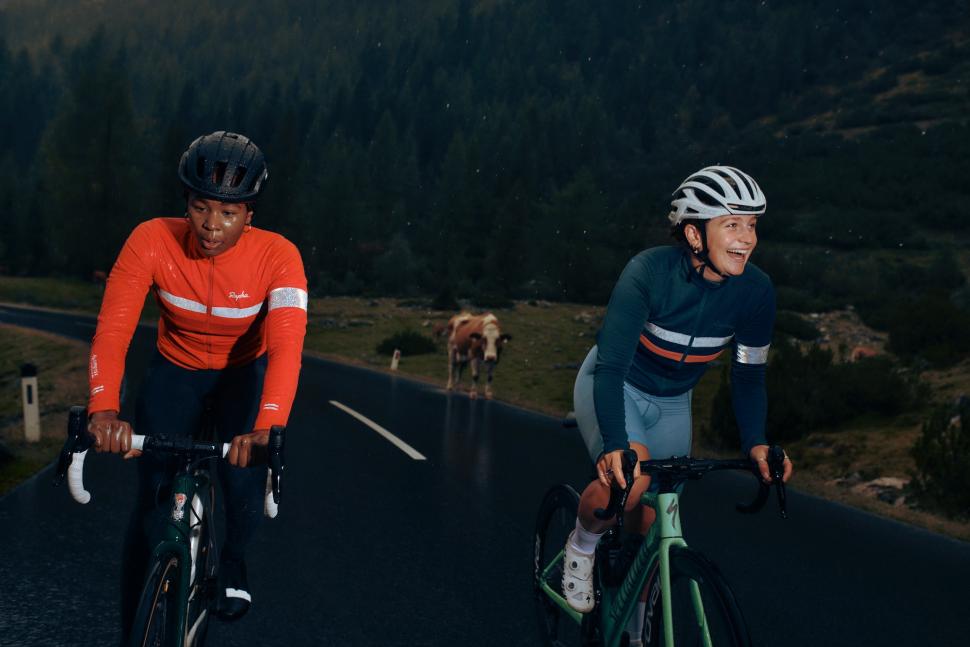 You get sweat-wicking insulation in key areas, a high-stretch exterior for a close fit, and reflective details on the chest, armband and lower back. As well as the usual three rear pockets, there are two concealed front pockets for ride essentials.

The Rapha Brevet Insulated Gore-Tex Infinium Jersey is available for both men and women in various colours. It is priced at £240 and we have one out on the road being tested as we speak.

Folding bike brand Brompton has updated the colourways of its C Line, Electric C Line and A-Line bike ranges for 2023. Brompton is introducing black componentry to the full range as well. 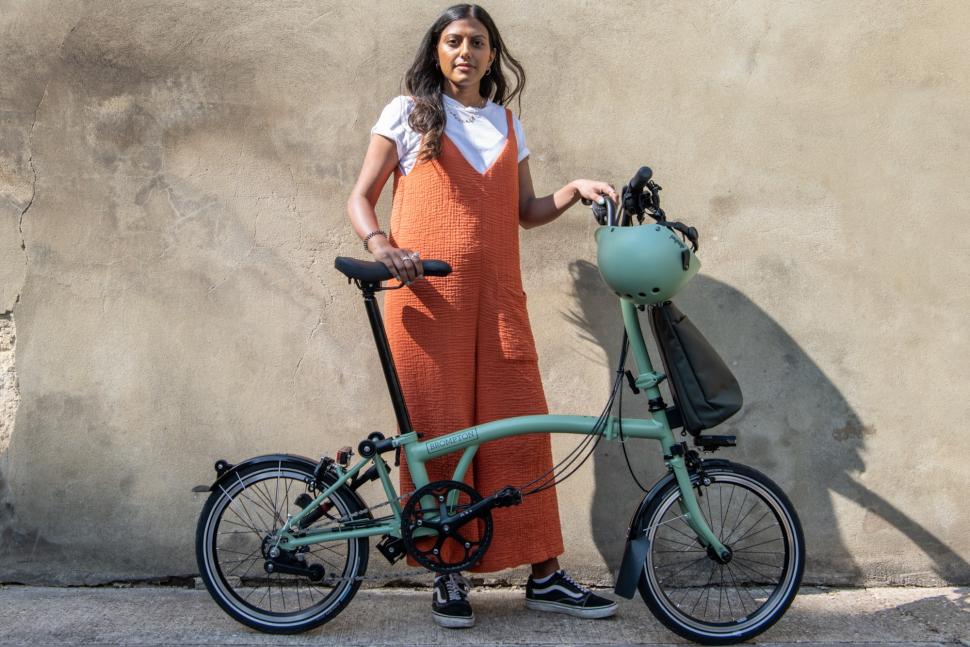 The Electric C Line will be available in all of the same colours as the C Line for the first time: a range of eight colours, including the new Matcha Green shown above.

The new range is also being simplified, with the C Line available in Urban (2-speed) and Explore (6-speed) options only, with the Utility (3-speed) option being phased out.

Read our review of the Brompton P Line Urban 2022 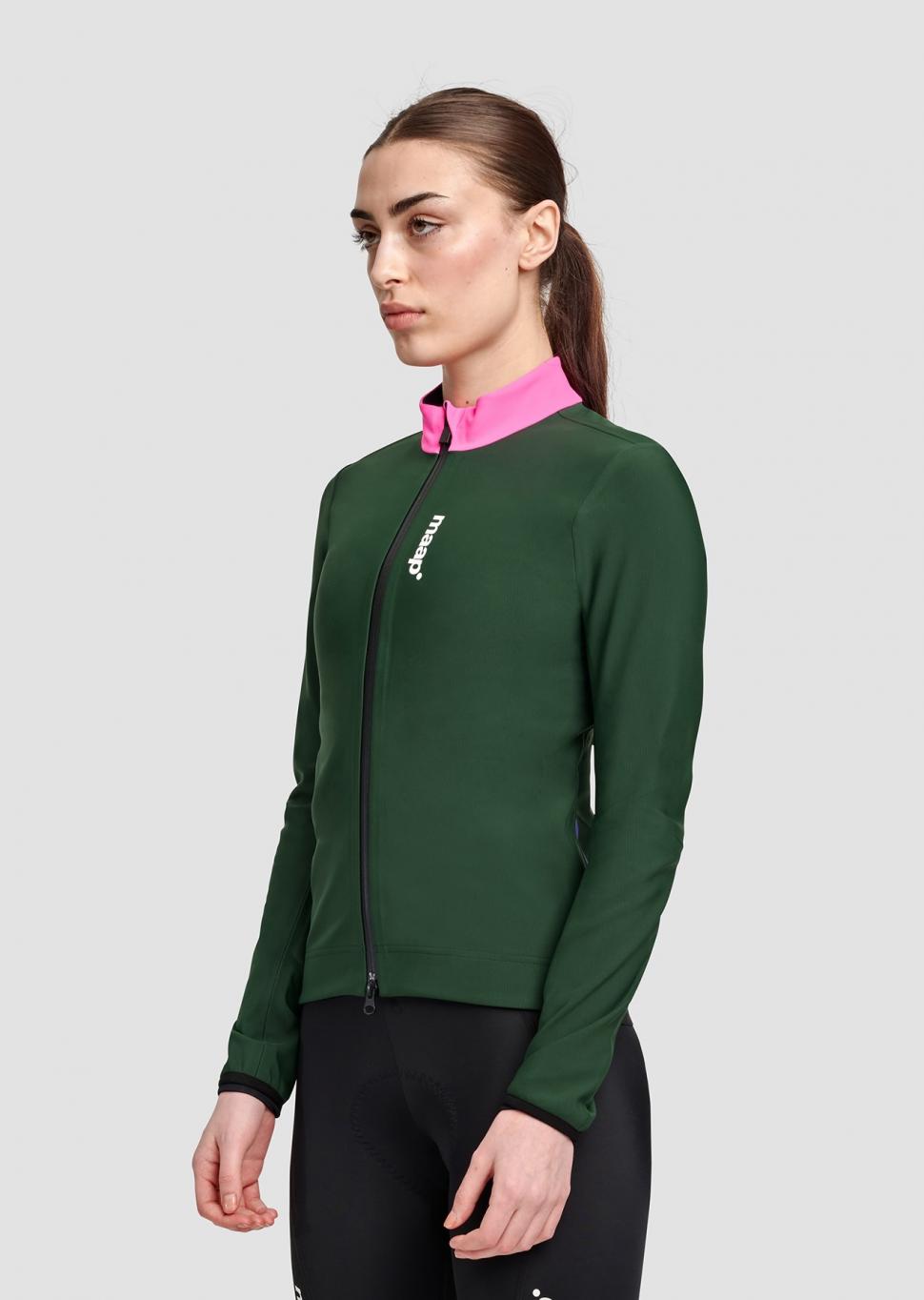 For example, one of the latest releases is the MAAP Training Winter Jacket (£230, available in men’s and women’s cuts). This uses a Drytex membrane to fend off the wind and rain and pairs that with a fleece lining for warmth. A 4-way stretch fabric is designed to offer freedom of movement. 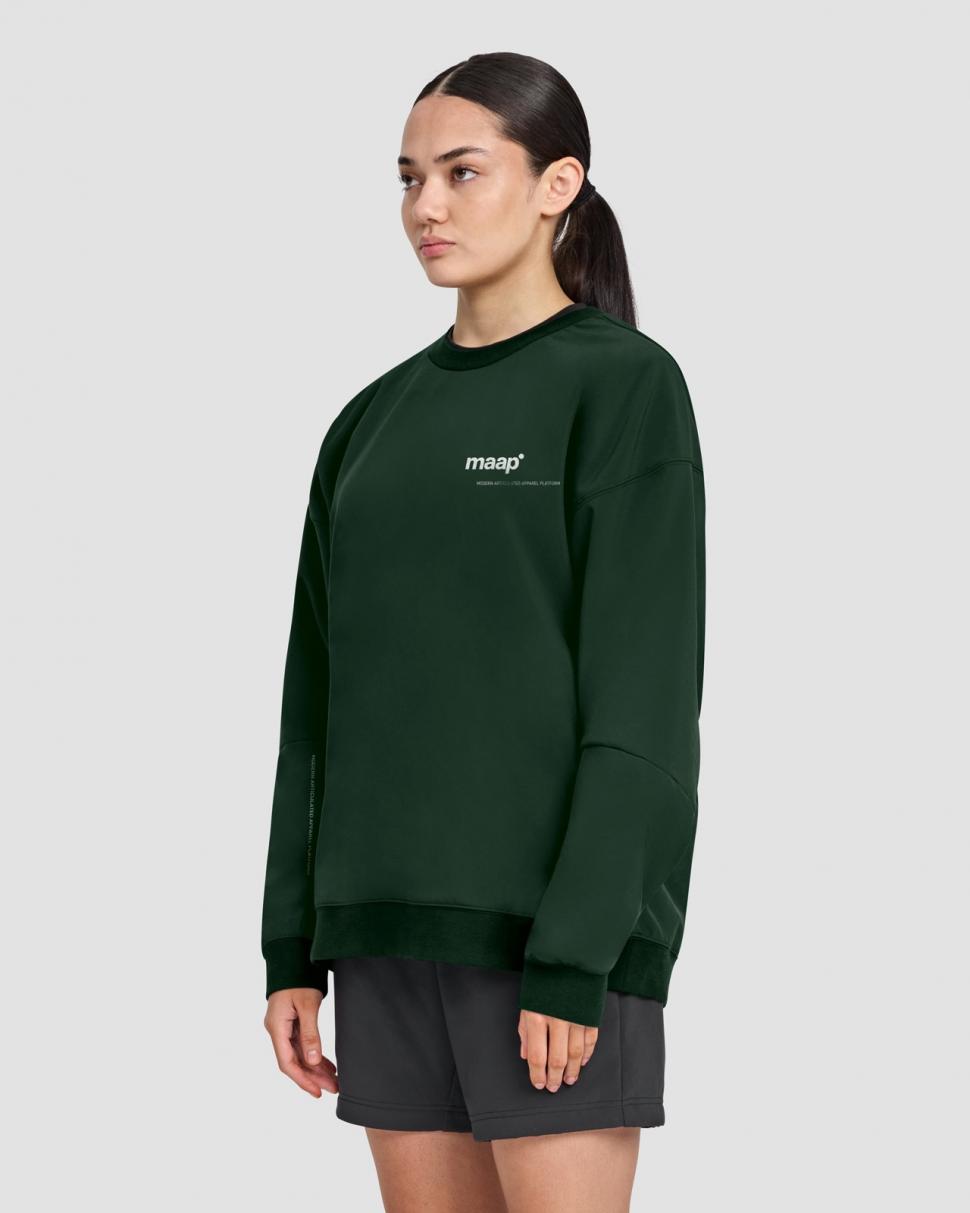 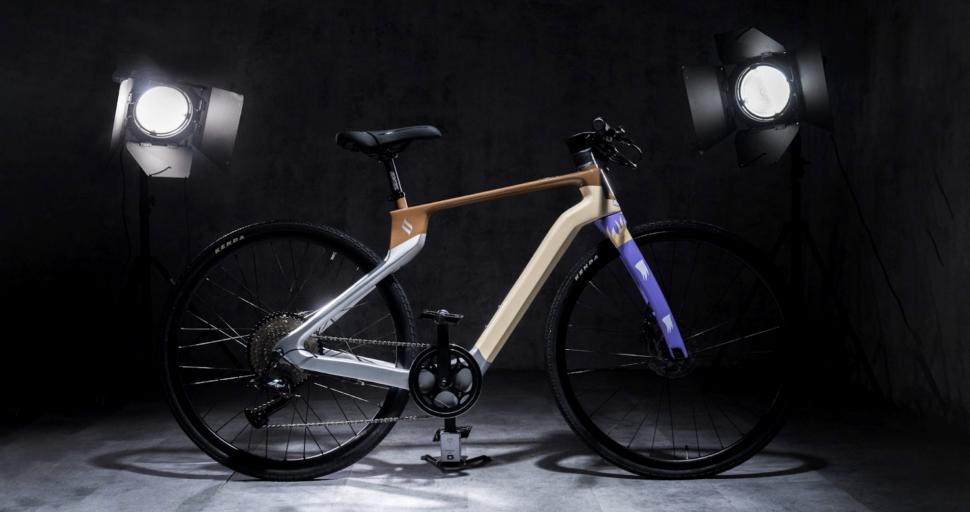 This is what we’ve been told by the two brands concerned. NFTs are unique digital goods, like digital art. But didn’t the world already decide that NFTs were a bit, you know… rubbish? Bloomberg reported in September that NFT trading was down 97% since January.

Avero is the brand that worked with Superstrata on the 3D-printed unibody bikes that we first told you about when they appeared on Indiegogo a couple of years ago. We then reported last year that many backers were still bikeless and that the bike that was on the way looked a long way from the sleek prototype originally shown.

Animoca Brands says that its partnership with Arevo allows it to link physical goods with unique digital goods.

Arevo x Animoca Brands NFT-validated carbon fibre bikes are expected to be unveiled in the first quarter of 2023. Bet you can’t wait. The chances of us reviewing one on road.cc? Slim.

Are these really the craziest gravel wheels in existence?

Serial bike and component lightener Gustav Gullholm, known as Dangerholm on Instagram, has shown these Syncros Silverton SL Gravel wheels and called them “some of the craziest gravel wheels in existence”.

Silverton SL cross-country mountain bike wheels already exist in the Syncros range with the hub shell, spokes and rim moulded as one piece. Syncros says that this allows it to produce one of the lightest wheelsets on the market (the 29in version with 30mm inner width has a claimed weight of 1,280g).

It also says that the torsional and lateral stiffness and low inertia translate into faster acceleration and better handling.

The picture shows a prototype of the Silverton SL Gravel wheel. Will it ever see full production? Although we don’t know for certain, we don’t see why not and if the mountain bike versions are anything to go by then these could well be making an appearance in our best road bike and gravel bike wheels Buyer’s Guide some time soon! 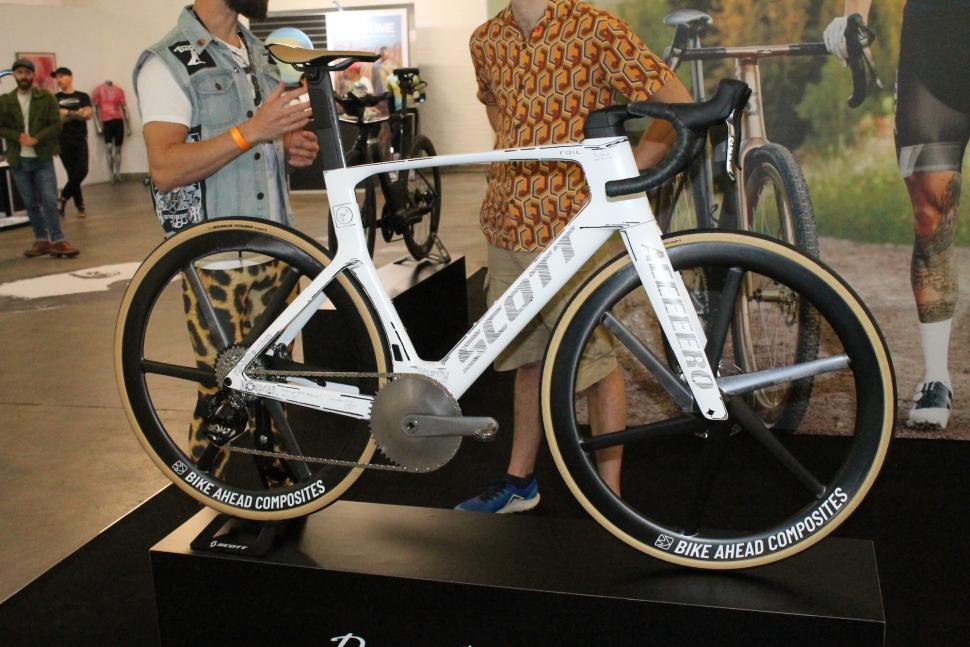 …We got the chance to check out a couple of his lightened-to-the-max bikes at Rouleur Live last weekend (including a Scott Contessa Addict that you can see here). 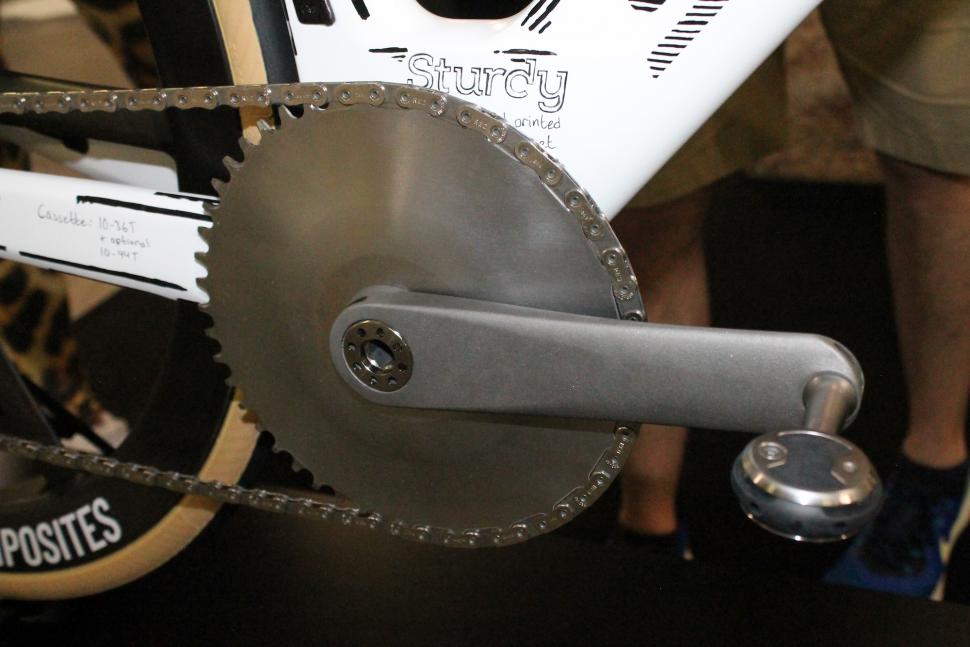 We told you about his Scott Foil last month but the version on display in London was fitted with a different 3D-printed titanium chainset from Sturdy.

We got the chance to check out the Bianchi Oltre RC Air Deflectors in person for the first time at Rouleur Live too. You might remember that they were announced when the Oltre RC was launched last month, but they won’t be permitted in UCI-sanctioned competition. They’ve provoked a lot of debate in their short history. 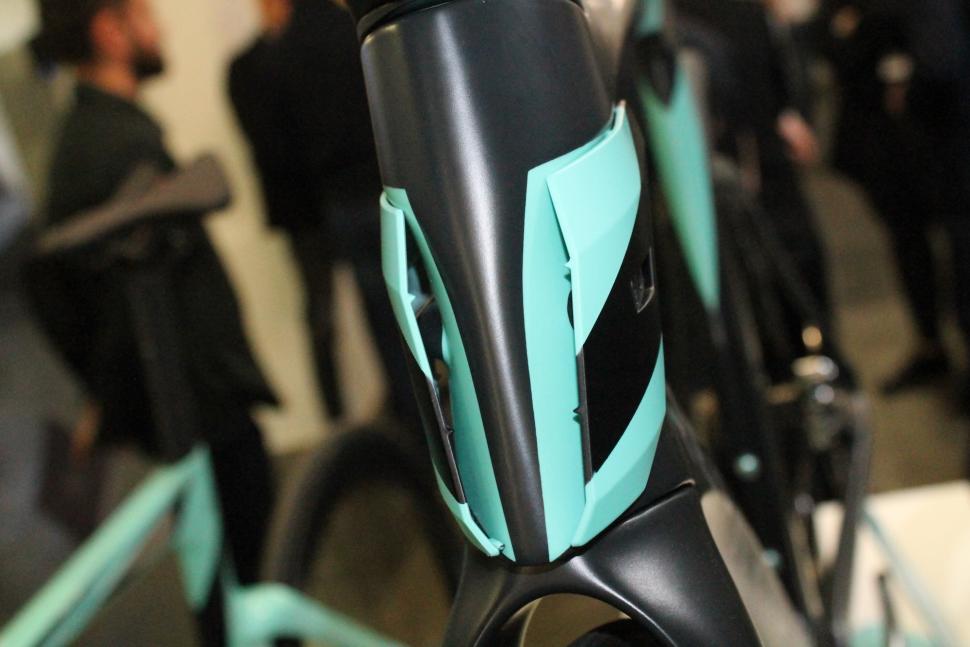 Get up close and you can see that each Air Deflector is simply an additional component that’s fixed to the head tube with two bolts. Removal would take seconds, Arkea Samsic mechanics rejoice! 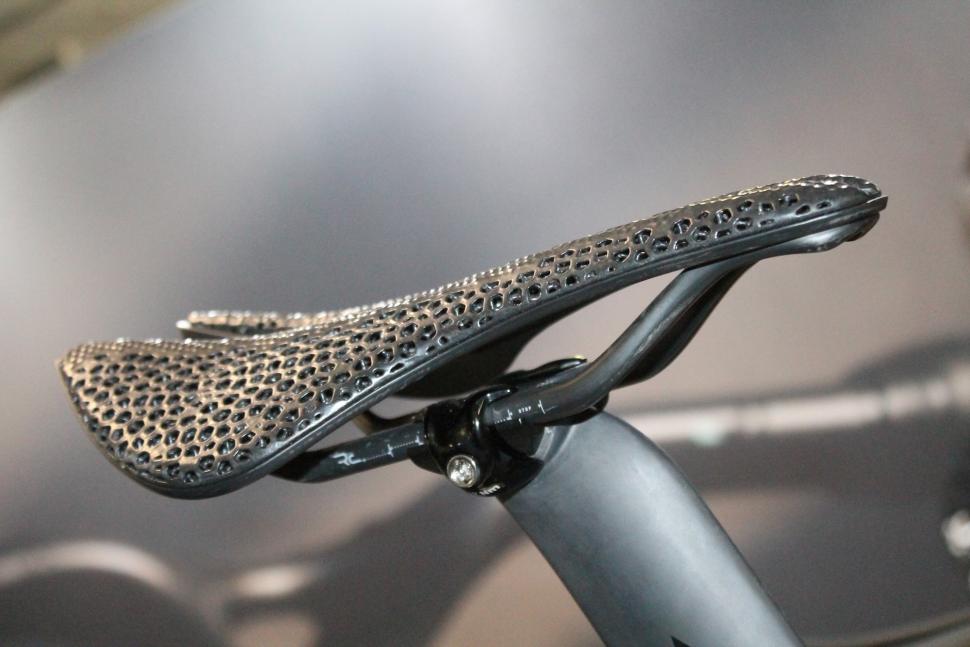 We were just as interested in Bianchi’s new RC139 Carbon Air saddle that features a 3D-printed pad and weighs just 168g. 3D-printed saddles are taking over the world. Read our review of the Specialized Power Pro with Mirror, for example.

What’s that you say? You want more Blue Granite and Mud Brown in cycling? This is your lucky day because Selle Italia is now offering gravel saddles in its Flite, SLR, and Novus families in these two new colours. 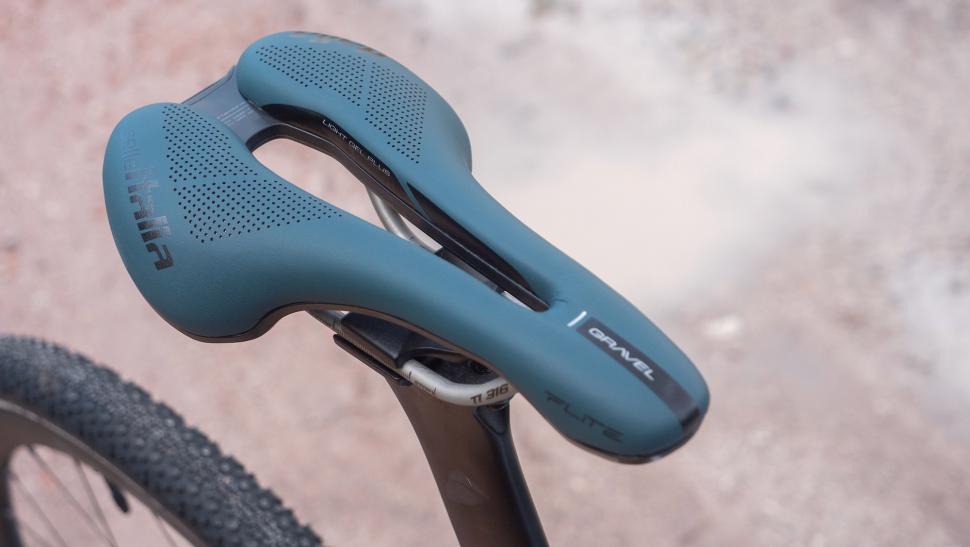 The three gravel saddles are fitted with Selle Italia’s Shock Absorber system between the rail and shell designed to soak up micro-vibrations. The Flite Boost Gravel (above) and SLR Boost Gravel (below, both £210.92) also feature gel padding, while the Novus Boost Evo Gravel (£114.59) has what is defined as Extra Padding, intended to offer long-ride comfort.

Check out the best bike saddles for 2022 here 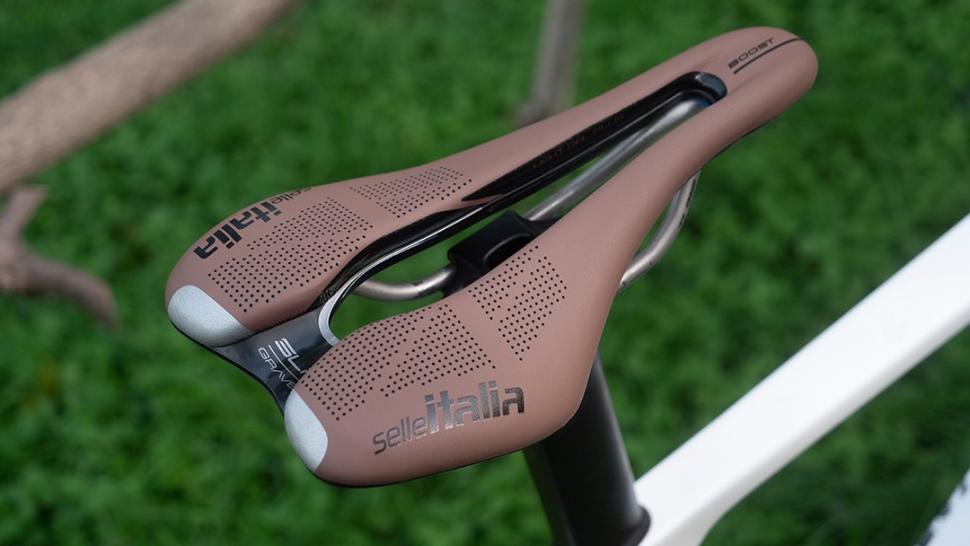 Zefal has introduced new Z Adventure Aero F8 and F12 waterproof front bags that fit aerobars for ultra cycling and bikepacking. The figures refer to the capacity in litres. 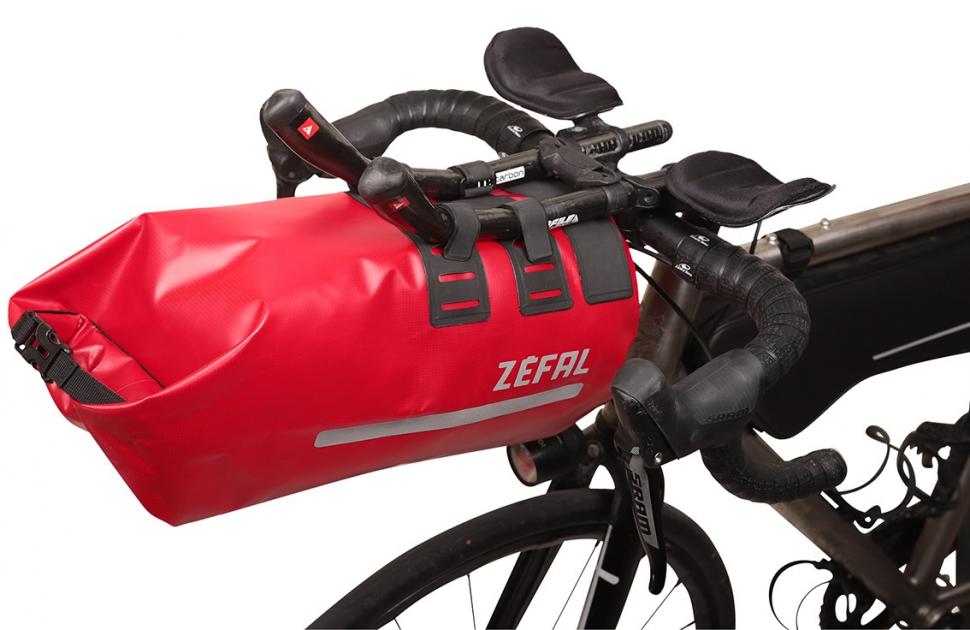 The Z Adventure Aero bags are made from tear-resistant 420D polyester TPU (thermoplastic polyurethane) with welded seams and a roll-top closure. Each has a maximum load of 3.5kg.

“The large capacity will allow you to carry light and bulky items, such as your bivouac equipment or spare clothing,” says Zefal. “They are easy to install and remove thanks to the self-gripping straps. They also have reflective strips for better visibility at night.”

In case you missed it earlier in the week…