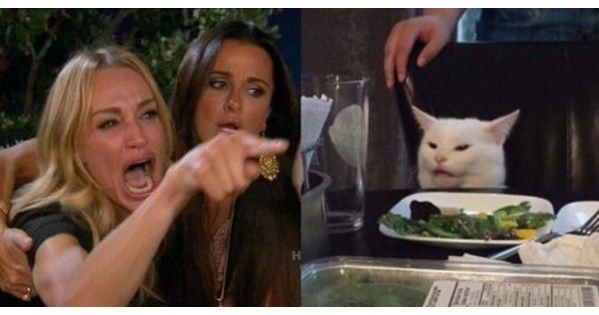 KYIV, Ukraine, Nov. 14, 2022 /PRNewswire/ — Blockchain charity fund Unchain has introduced its NFT auction featuring one of the most viral and iconic memes of all times – “Woman Yelling at a Cat”. Unchain.fund in support of Taylor Armstrong and Smudge the Cat’s family announced the charity auction on Foundation.app marketplace.

The auction will be held with marketing support of Ukrainian PR agency Zlodei (BADS) and project manager Eugene Lapitsky, who sold another popular meme “Coffin Dance” as NFT and donated $250,000 from proceeds to “Come Back Alive” charity fund recently this year.

The auction will start on November 18th at 1pm NY time. The part of the proceeds will go to humanitarian aid of the people of Ukraine suffering from russian invasion.

“Woman Yelling at a Cat” origins

The meme features a screencap of “The Real Housewives of Beverly Hills” star Taylor Armstrong and a confused-looking Smudge the Cat sitting behind a dinner plate. The meme gained significant popularity across the web in summer of 2019 and was awarded as Meme of the year in 2020. “Woman Yelling at a Cat” remains one of the most used memes with numerous variations and fans, including many celebrities, like Snoop Dog, John Cena and Stefon Diggs.

Unchain is Ukrainian blockchain charity fund supported by Ethereum founder Vitalik Buterin founded in 2022. Unchain is currently raising funds for Ukrainian people affected by the war and providing them with food, medications, clothing, transport and shelters. Providing detailed and transparent spending reports, the fund has already raised and donated more than $9,300,000 so far.