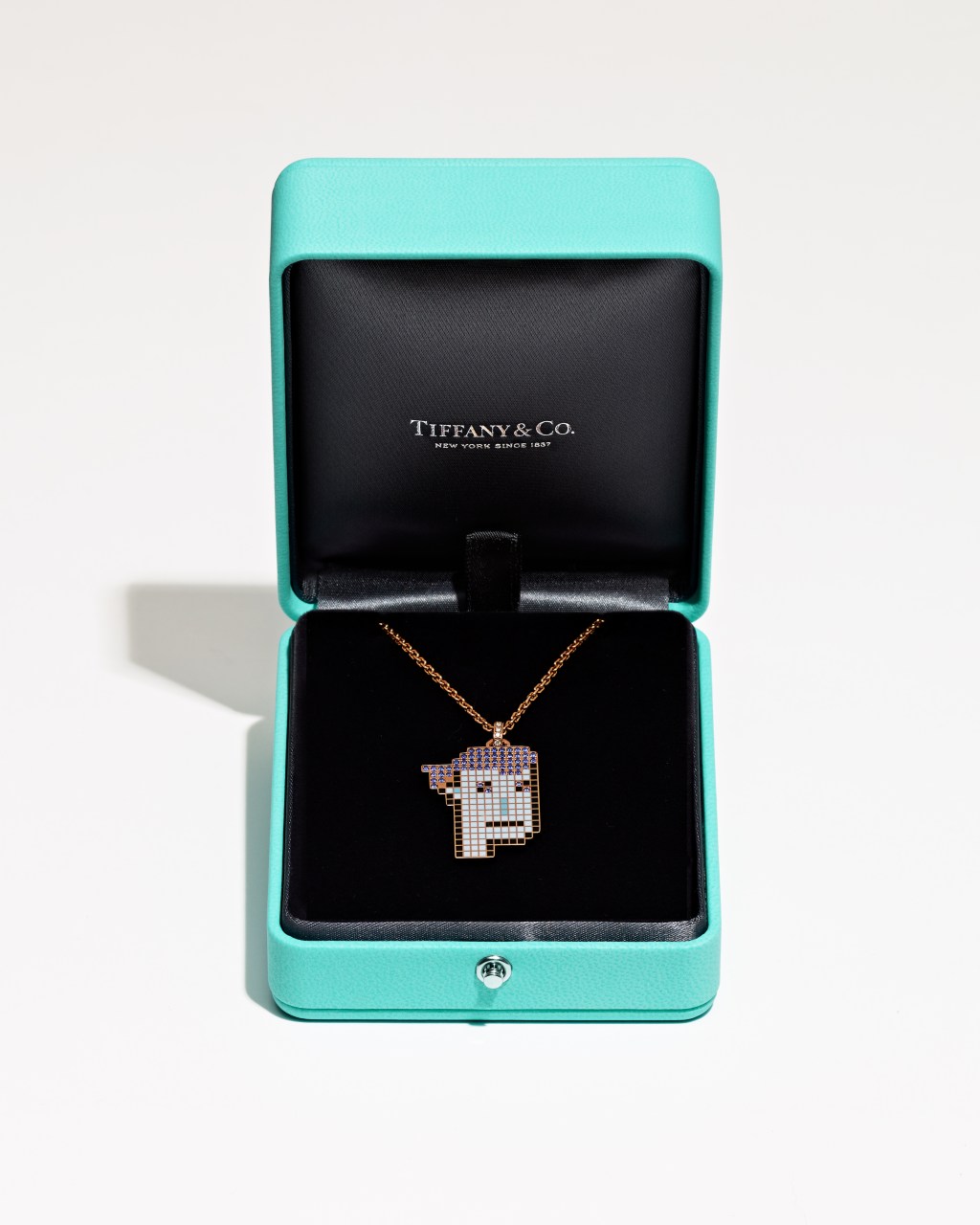 Tiffany & Co. is coming for crypto bros. On Monday, the jeweler will unveil a new bespoke program for owners of Cryptopunk NFTs called NFTiff.

The initiative was spearheaded by Cryptopunk owner and Tiffany executive vice president for product and communication Alexandre Arnault. In April he was surprised by an outpouring of interest when he posted a photo of a bespoke Tiffany pendant made to look like his Cryptopunk #3167. Now up to 250 fellow Cryptopunk owners will be able to have a similar pendant made in their avatar’s likeness.

Arnault said his bullish stance toward NFTs stems from the fact that they are “a cultural phenomenon and viewed as a medium of art that has characteristics that are important to a younger generation. They are digital-only, unique, very well-stored on blockchain and obviously shareable. I’m excited about the community around collecting NFTs — these people don’t necessarily have a lot in common, but share the same interest around one kind of art,” he said.

Cryptopunks, in Arnault’s own words, are “The OG” of the NFT world. The collection is limited to a supply of 10,000 one-off avatars that are bought and sold on the open cryptocurrency market. Owning one comes with a badge of honor among a certain, and very affluent, subset of people.

For Arnault, bringing Cryptopunk to Tiffany is as much about digging into his own community (many of his friends are fellow Cryptopunk owners) as it is about introducing the jeweler to a new target audience.

“These clients obviously skew a bit younger than our [classic] client base. It’s an anonymous [population], it’s not like you know who owns what, but what we generally understand is that they are younger and very affluent, a lot of them made large amounts of money in the crypto sphere. People need to understand that a lot of the things in their world are linked to luxury like desirability, scarcity, trends — they understand the ups and downs,” said Arnault.

Tiffany is among the first jewelers in its category to offer a bespoke jewelry service to NFT holders. NFTiff is the second NFT-related initiative for the jeweler, which in March acquired an NFT by Tom Sachs that was inspired by Tiffany.

“What is exciting for people is that you can hold an NFT but you can’t see or experience anything with them. At Tiffany, we are giving them the opportunity to turn [a Cryptopunk] into a piece of jewelry made by hand with the upmost craftsmanship,” Arnault added.

Starting this month, Cryptopunk owners can access the NFTiff website to purchase an NFTiff pass that will be stored in blockchain technology. The passes are only available for purchase with Ethereum cryptocurrency and are priced at 30 Ethereum, which is currently trading at around $50,000 dollars.

Tiffany is only issuing 250 NFTiff passes, and because some Cryptopunk holders own more than one, it is only permitting up to three passes per person.

The pass can then be exchanged for a made-to-order pendant that features a shopper’s Cryptopunk avatar, which will be designed at Tiffany’s innovation center in New York City and produced at its workshop in Cumberland, Rhode Island.

Each pendant will be made of 18-karat rose or yellow gold and feature a minimum combined total of 30 gemstones and diamonds. It will come with a specially-designed chain with rectangular links made to resemble pixels. NFTiff owners are expected to receive a digital NFT rendering of the pendants in December, with the physical jewelry delivery targeted for early 2023.

While the project is only geared toward a base audience of 10,000 people, Arnault said that NFTiff “is a way for us to get into people’s lives who wouldn’t necessarily be primary customers of Tiffany. It’s a way for people to get access to our brand. I don’t think we will be in the metaverse tomorrow morning, which is where these people spend most of their time, so it’s a nice way to reach this community without doing anything that doesn’t make sense for the brand.”

As for the future of NFT’s at Tiffany, Arnault said of further NFTiff iterations: “Never say never.”