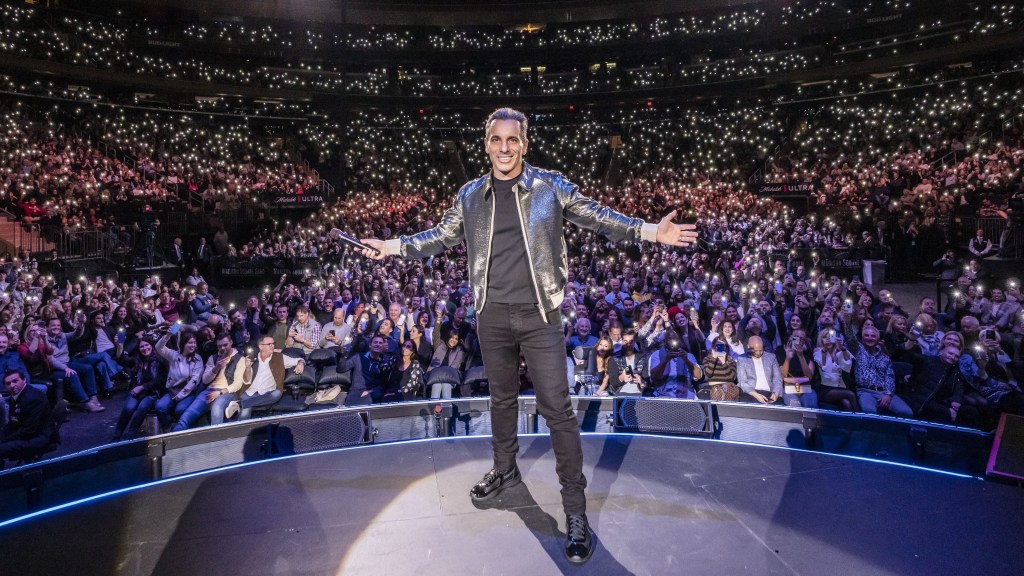 Top stand-up comedian Sebastian Maniscalco surprised fans at his shows in the New York area by giving away free commemorative NFTs to all ticketholders — the first comedian to launch such an offering using the next-gen digital collectible technology.

The observational comedian’s complimentary NFTs (nonfungible tokens), designed by his wife, Lana Gomez, are uniquely designed for each show. The gold-shaded NFTs, minted by Ticketmaster, feature each ticketholder’s individual section, row and seat. Owners of the NFTs will get exclusive access to future Maniscalco offers and events.

“I have never done this before and hell — who knows — I may never do it again!” Maniscalco said in announcing the NFT freebies on social media.

The free NFTs are available to fans who purchased tickets to Maniscalco’s “Nobody Does This Tour” in Toronto (March 19), Madison Square Garden (March 21), Prudential Center in Newark, N.J. (March 23), Barclays Center in Brooklyn (March 24) and UBS Arena in Belmont Park, N.Y. (March 26).

“I have always looked at New York City as a second home, and I have always had a special connection with the people of the city,” Maniscalco said.

His four New York-area shows are playing to over 80,000 attendees, building on sold-out arena shows that have included a comedy record for Chicago’s United Center with 21,286 fans as well as the highest gross for a single event at Boston’s TD Garden.

The comedian is latching on to NFT mania — which shows no signs of abating — as a way to elevate engagement with his fans, and laying groundwork for future promotions. On the NFT project, Maniscalco is working with Ticketmaster, which helped deliver over 500,000 NFTs during the regular NFL season and Super Bowl LVI to football fans.

“Connecting digital collectibles to the live event experience is still in its infancy,” said David Marcus, Ticketmaster’s EVP for music. “Sebastian is an adventurous artist, and it’s exciting to see how he is envisioning how fans collect in a digital world.”

A portion of the proceeds from the “Nobody Does This Tour” benefits Maniscalco and Gomez’s foundation, Tag You’re It!, which supports U.S. veterans, Alzheimer’s disease and children’s education.

In addition to his U.S. comedy tour, Maniscalco is finishing work on his film “About My Father,” which is currently in post-production. The Lionsgate comedy is loosely based on his life and relationship with his father, played by Robert De Niro. Next month, Maniscalco will continue his Las Vegas residency. He also stars in “Well Done With Sebastian Maniscalco” cooking-comedy show on Discovery Plus.

Maniscalco announced the NFT giveaway on Instagram to his 1.2 million followers: