Prepare for the next NFT surge with Big Eyes Coin, The Sandbox, and Axie Infinity 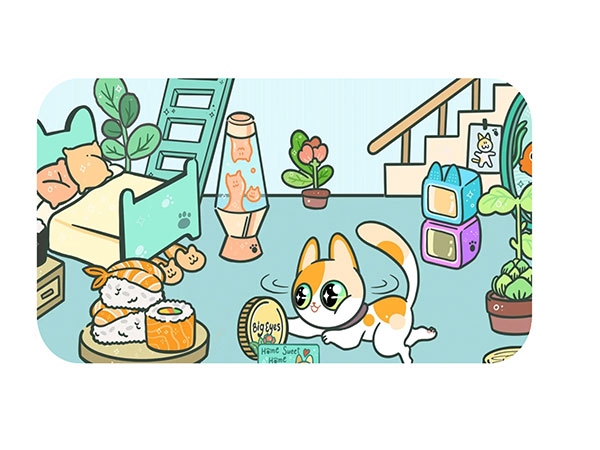 New Delhi [India], November 8 (ANI/ATK): The Sandbox (SAND) and Axie Infinity (AXS) have consistently dominated the non-fungible token (NFT) space with their play-to-earn (P2E) games. However, a new cryptocurrency called Big Eyes Coin (BIG) can join this elite group. The NFT craze went mainstream following the release of Yuga Labs’ Bored Ape Yacht Club (BAYC) NFT collection in 2021. The BAYC NFTs sold out in less than 12 hours, causing a FOMO sensation within the cryptocurrency market. Since then, the NFT market’s popularity has risen exponentially.
As NFT adoption grows, no one wants to miss the next NFT surge. The cryptocurrency community is paying attention to the new cryptocurrency, Big Eyes Coin, as it plans to launch an NFT collection that will rank among the top 10, potentially becoming the next big cryptocurrency in the NFT space. So why do crypto enthusiasts covet Big Eyes Coin alongside The Sandbox and Axie Infinity as we prepare for the next potential NFT surge? Let’s find out!
Big Eyes Coin — Adding Utility To NFTs
Big Eyes Coin (BIG) is a new Ethereum-based meme cryptocurrency aiming to shake up the DeFi sector. The cat-themed coin aims to transfer wealth to the DeFi ecosystem while donating 5 per cent of its total token supply to ocean conservation charities. At the time of writing, BIG has raised USD 9.18 million through its ongoing pre-sale, demonstrating the crypto community’s enthusiasm for this new cryptocurrency.
As mentioned above, Big Eyes Coin aims to have an NFT collection that ranks among the top 10 projects, which will make each BIG NFT valuable in the future. Big Eyes Coin has also added utility to its NFTs, so you don’t only have to hold the NFT and wait for its value to skyrocket.
Users who hold a Big Eyes Coin NFT will have exclusive access to various entertaining activities and clubs. Furthermore, BIG will host seasonal NFT events, where you can socialize with other Big Eyes Coin NFT holders at the Big Eyes Sushi Crew.
Can The Sandbox Topple Its Previous NFT Sale Record?
The Sandbox (SAND) established a new benchmark in 2021 for the most expensive NFT sold. A metaverse giant yacht was sold for an unbelievable $650,000! The Sandbox (SAND) is renowned for its lucrative NFT marketplace, which features premium collections with high-profile personalities like Snoop Dogg and Paris Hilton.
The Sandbox is based on the Ethereum blockchain, which enables it to make use of the new Proof-of-Stake (PoS) protocol Ethereum (ETH) has embraced. The Sandbox can function more effectively as a result, which can attract more users to the platform. However, can SAND topple its previous $650,000 NFT record? At the time of writing, The Sandbox user base has decreased due to the 2022 crypto collapse, averaging less than a thousand daily users.
However, The Sandbox has created a base from which it can expand once more, perhaps surpassing its previous NFT sale record in the future.
Play Pokemon And Earn With Axie Infinity

Axie Infinity (AXS) is a pokemon-based NFT game. Most people recall playing Pokemon, engaging in battles, watching their virtual pets develop, and capturing all sorts of strange and amazing creatures.
Also, most of us remember playing Pokemon for entertainment without a financial reward. However, thanks to Axie Infinity, we can now earn with our NFT Pokemons. You can engage in combat with other players and carry out quests to gather Smooth Love Potions (SLPs), the in-game currency of the AXS ecosystem, once you have purchased at least three Axies.
These potions can be used to generate additional income by selling and breeding Axies or by selling the SLPs for a profit. AXS has proven to be lucrative, and with its recent updates, it aims to offer more earning channels for users as the cryptocurrency market recovers.
Conclusion
Big Eyes Coin, The Sandbox, and Axie Infinity represent the best chance to prepare for a potential NFT surge due to their unique offerings. While The Sandbox and Axie Infinity are already established in the cryptocurrency market, it is Big Eyes Coin that has been attracting interest from the crypto community due to the low-entry point that it offers.
Big Eyes Coin is currently on pre-sale and is selling fast, so you must act before it’s too late. Follow the links below for more information.
For More Information On Big Eyes Coin (BIG), Click The Links Below:
Pre-sale: https://buy.bigeyes.space/
Official Website: https://bigeyes.space/
Telegram: https://t.me/BIGEYESOFFICIAL
This story has been provided by ATK. ANI will not be responsible in any way for the content in this article. (ANI/ATK)