NFT Band Debuts with Performance on the Ellen DeGeneres Show 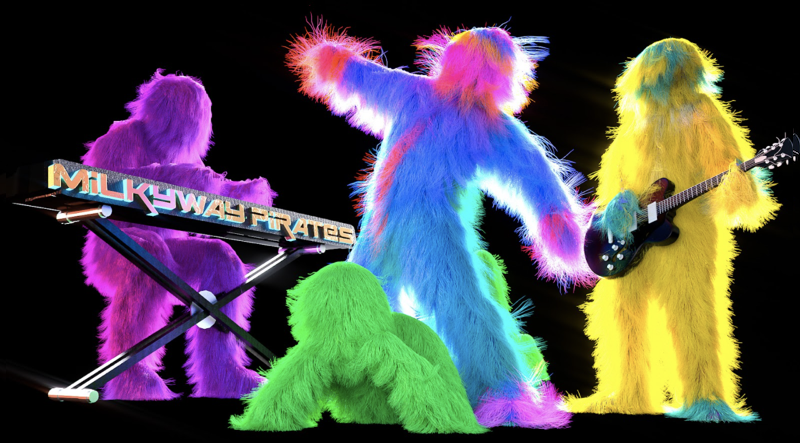 Ellen Degeneres has already minted her own hand drawn NFT collection to benefit a hunger relief organization, she’s bought and sold NFTs, and she’s advocated for them on her show before, she’s raised money for non profits by selling them, and the trend continues with the announcement of the Milkyway Pirates band and NFT project debuting on her show today.

NEW YORK, NY, March 22, 2022 (GLOBE NEWSWIRE) — The Milkyway Pirates NFT collection made its debut on national television as the first ever NFT band to perform on TV when the NFTs made their debut on the Ellen DeGeneres show today. This is a world record made possible by the Milkyway Pirates NFT collection lead by female recording artist, Kiesza. This event sets a world record for an avatar band performance on a national television broadcast with Ellen DeGeneres.

Platinum selling dance music artist Kiesza hit the stage Tuesday on the Ellen DeGeneres show, performing with characters from her upcoming NFT project, The Milkyway Pirates. Also covered in the episode, Kiesza and Ellen discover their mutual passion for mountain gorilla conservation, causes, and Kiesza talks about her comeback from a near-fatal car crash in 2017.

The Milkyway Pirates, the generative avatar project with metaverse ready NFTs announced it has taken an undisclosed amount of seed investment from QGlobe, the accelerator and launchpad for Web3 Metaverse and GameFi projects. Project leader and dance music artist, Kiesza said:

“The Milkyway Pirates is an ambitious project that aims to set world records to innovate in music, blockchain, and space exploration. We are pleased that QGlobe has selected the Milkyway pirates into the accelerator program. Funding aside, their teams metaverse and web3 backgrounds have turned this project into a serious contender.”

The NFT band that played on the Ellen Degeneres show are enabled to move with multi-chain emote technology called Meta Moves that are not simply in the animation you see performing on Ellen. Still, the dance move emote is interoperable across platforms such as Decentraland. Now NFT avatars can emote with custom moves unique to each Smart NFT bringing in game utility that empowers users with the expression of movement.

The art brings color and movement to life as each Smart NFT is metaverse equipped avatars who not only perform, but also dance their way through the metaverse with decentralized technology that’s being released for the first time. Presented by QGlobe, generative art project Milkyway Pirates brings metaverse expression straight from Kiesza’s original choreographed moves to motion capture powered NFTs. Milkyway Pirates NFTs now have the utility of metaverse expression with dance emotes that create a new way for NFT holders to express themselves in the metaverse with dance culture emotes. Finally, with blockchain technology, dancers can get paid royalties for their unique choreography.

Smart NFTs are being brought to the masses. Milkyway Pirates are the first Smart NFTs that go beyond exciting utility, but set a record for the dance emote technology and television appearance. Each NFT in the collection is hand crafted by Luke Didlo, a world renowned fine NFT artist. Until now Decentraland avatars have had a limited range of motion in how they can express themselves with decentralized movements, called emotes.

Of the Milkyway Pirates generative fine art NFT collection, 10 NFT avatars will be equipped with metaverse emotes in partnership with Meta Moves and the QGlobe metafi launchpad. The Milkyway Pirates in collaboration with MetaMoves brings the band members to life through custom human performed movements wearing a suit. As the first project to gain access, the Decentraland DAO approved the Meta Moves technology after reviewing the submission of a poll requesting “OPEN NFT Emote Loading/Minting in Decentraland to the Public, similar to wearable minting” according to a Decentraland spokesperson.

Kiesza, primarily known for Sound of a Woman record’s hit single Hideaway, shares a passion with Ellen for their love of non profits as discussed in today’s episode on the Ellen DeGeneres show. In the spirit of dance, music, and expression, movement should be made possible for all as a basic human form of expression. With that purpose in mind, a portion of one super rare NFT in the collection will be sold with a portion of the proceeds going to Medi Print, a non profit organization that gives custom prosthetics to those in need suffering from amputation or missing limbs. Because to be fully inclusive in dance culture it’s important to empower those with disabilities to bring the joy of self-expression through movement.

Finally, there will be a Twitter Space marathon that will commence on March 28th at noon as a mint party to celebrate the first ever NFT avatar where fans can come on as a speaker to discuss NFT culture and celebrate the mint party that will raise money for prosthetics for those in need.

About QGlobe: QGlobe is the Launchpad and Accelerator for blockchain game projects. Users of the QGlobe Launchpad doesn’t just give gamers their favorite games, it gives them the chance to be part of the game by way of community growth, guilds, staking, and rewards. With QGlobe, gamers can have a stake in the gameworlds they love. QGlobe funding frameworks provide game developers and startups with the funds they need and QGlobe venture yields turn gamers into passive income earning stakeholders of the games they play and love.

About Meta Moves: Established as a Novel NFT collection where all members are able to bring to life their digital avatars through custom Motion Capture. There stimulating collection of unique 1/1 animated and sound designed data files living on the Ethereum blockchain allows users to endeavor in the Decentralized Movements market. All Meta-Moves holders are part of a community that gives back to society through gifting 3D printed prosthetic Limbs, Meta Moves is about Movement not only in the Metaverse but in real life to.

What Is Haart Sphere? Inside Julia Haart’s Metaverse Business