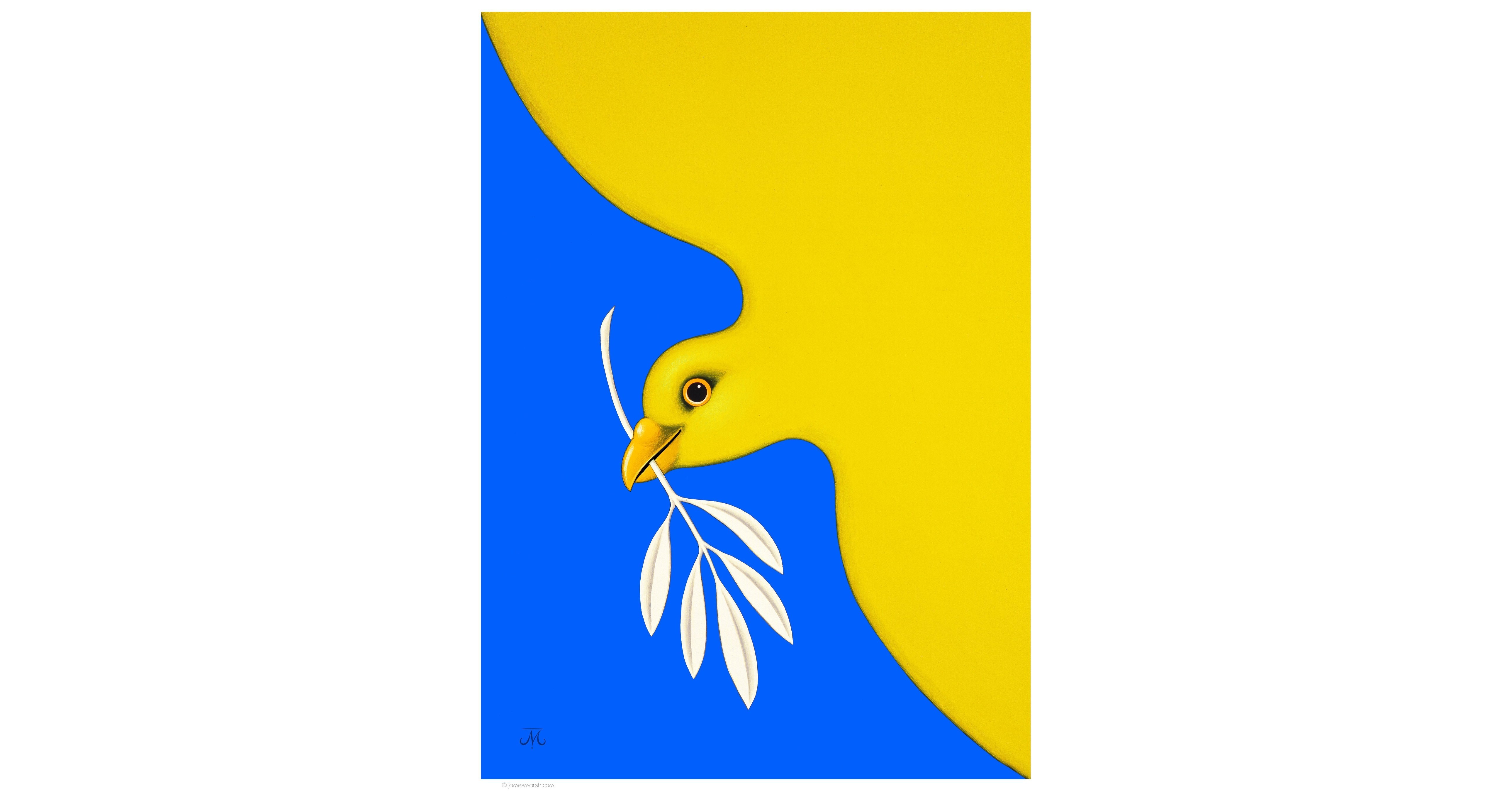 Purchasers of these first edition NFTs can choose to exchange their NFT for a signed limited edition print if they would prefer to own a physical representation of the image.

James Marsh is an artist, illustrator, designer & author whose work is famous for exploring themes of ecology and environmental issues. He is best known for his striking album covers for new wave band Talk Talk, and for a number of book jackets and Time Magazine covers. He has previously been listed by the Independent in their UK Top Ten of Leading Illustrators.

“I wanted to create an image that would speak for the Ukrainian Crisis in a simple, direct way. I felt intuitively that the best message to convey would be one of peace, as opposed to one of war, which has subsequently transpired. Also from a language perspective, I imagined that a poster without words would be the most apt, internationally. A dove and the Ukrainian flag livery says it all, and I trust anyone seeing it gets the same vital message.” James Marsh

These truly on-chain digital collectibles will be minted exclusively by MusicArt.

They will also be sold through hypergallery.com, in GBP sterling, making the purchase of these NFTs possible for anyone not currently familiar with crypto currencies.

MusicArt is a supremely planet and user-friendly online marketplace for single and album artwork, music posters, personalised messages, and autographs. The MusicArt platform features low fees, is scalable (currently managing up to 100,000 transactions per second) and uses 10,000 times less energy than its main competitors. It also maintains complete transaction transparency.

All proceeds from the sale of these NFTs will go towards UNHCR, the UN Refugee Agency who are offering life-saving protection to families forced to flee their homes.

“Marsh‘s art was a feature of all the Talk Talk releases, singles as well as albums, but his work was equally prominent throughout the 1980s on a range of book covers, particularly the series he produced for Angela Carter and JG Ballard. The hard- edged, post-Surrealist style favoured by Marsh was a popular one in the 70s and 80s […] and I‘ve often had to look twice to see whether a cover is one of his. But while the Magritte-like visual games may be replicated elsewhere, Marsh has a preoccupation with animals—birds and butterflies especially—that sets his paintings apart.” John Coulthart (award-winning artist, designer and writer for Andre Deutsch, Arrow Academy, Communication Arts and Eye Magazine).

“It is rare for a singer, or group, to consistently use one artist to illustrate all their album covers, and for the art to marry so beautifully with the music. His range of covers for Talk Talk are an amazing set of works, but beyond them is a broader body of work, including designs for The Beatles, Andy Warhol, and many of the top magazines, dating from the Sixties to the present day. I like James Marsh‘s illustrations very much, this is a fine body of work”. Sir Peter Blake

“One of the most successful Illustrators in this country. – He has an acute awareness of the problems and the interests of his clients, and the rare gift of solving them with visual ideas.” John Halas, Novum Magazine

“James‘s illustrations were central to establishing the Idries Shah Foundation, and to UNESCO‘s collaboration. – They illuminated our childhoods, and brought the tales our father told us to life – he adored his work.” Tahir Shah

“He gives us beautiful pictures that please. But above all he teaches us to look more closely. With visual traps, double-bottomed tricks, allusions and ironic details he wages a discreet British battle against superficiality and thoughtlessness. It’s really too bad that works like these are so ‘fleeting‘ because of the ephemerality of the media Marsh works for (magazines & advertising), while monumental nullities live on in museums.” Karl Michael Armer, Communication Arts 6/91

Presented by MusicArt.io in collaboration with Hypergallery Ltd & James Marsh