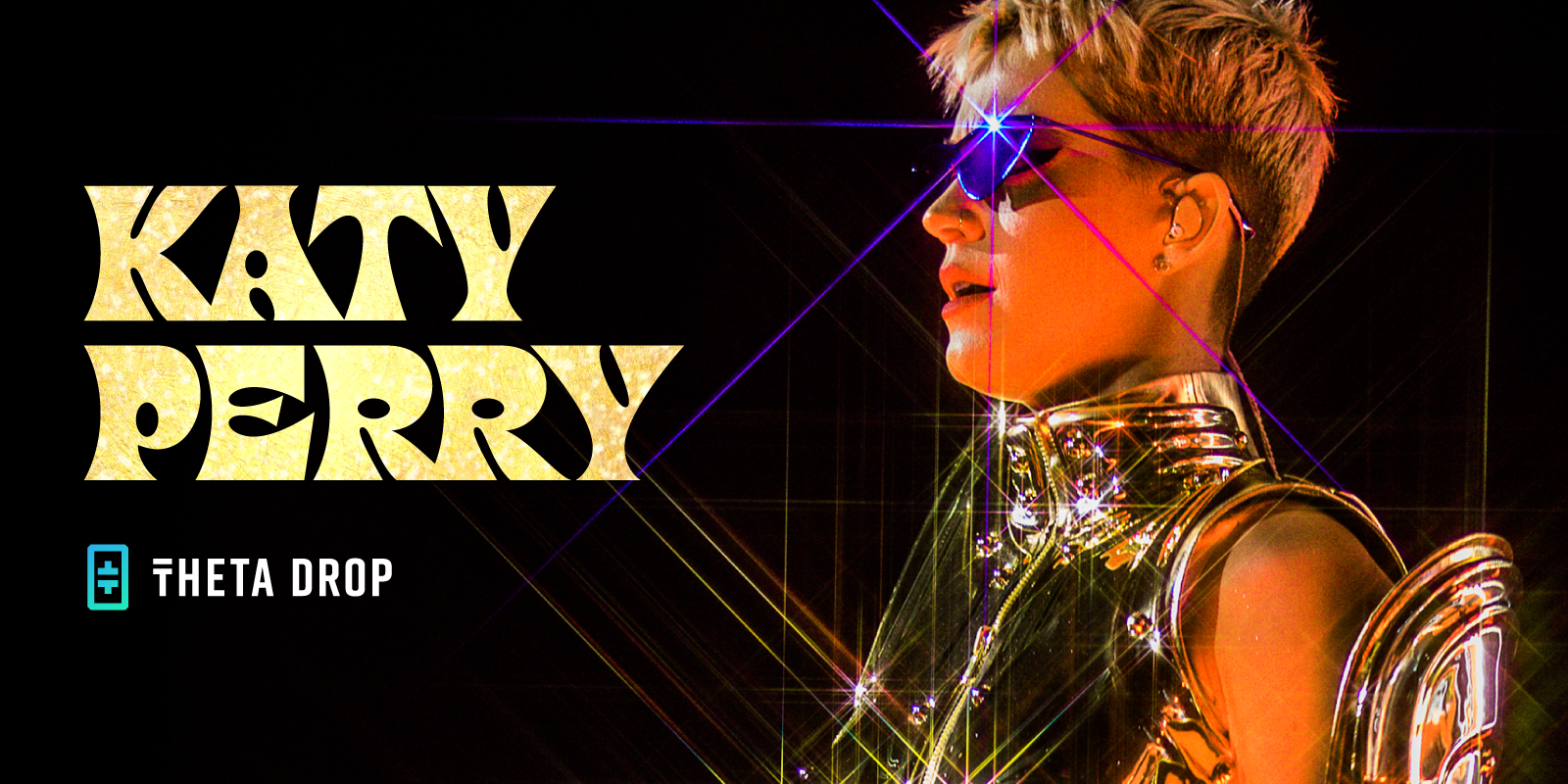 Los Angeles (Friday, 4 March) – Following the successful launch of her debut NFT collection in December of last year, global pop superstar Katy Perry is releasing a second collection of NFTs today on Theta Network that will look back to her 2017-2018 Witness Tour. The drop will take place on Friday 4 March at 1pm PST.

This second collection will follow “The Roar Package” which sold out in a record 95 minutes, making it one of the most successful NFT drops on ThetaDrop, Theta Network’s low-cost and green NFT marketplace. The collection raised $1.2m in primary sales and $860k in secondary sales, with over 6500 unique buyers taking part. More Katy Perry NFT drops will follow over the course of 2022.

As before, “The Witness Dice Collection” will be more than just digital art collectibles; these Theta NFTs will bridge the gap between the physical and digital world to give fans the chance to own an iconic piece of Katy Perry history: the two giant golden dice on which she performed her song “Roulette” during her Witness Tour. These dice will be auctioned as a one-of-one NFT, much like the “Golden Lion” stage prop from her 2015 globally-televised performance. The upcoming collection will also connect Katy Perry fans with enviable benefits, including exclusive merchandise and access to her nostalgia store.

Both collections of NFTs are being issued to celebrate Perry’s “Play” residency at the Resorts World Las Vegas hotel. Due to popular demand, Perry’s team recently confirmed an extension to the residency. The show dates added will take place from May 27 to June 11, 2022, including Memorial Day Weekend, and July 29 to August 13, 2022.

“It is no surprise to us that Katy Perry fans reacted so well to our utility and reward-based NFTs” says Mitch Liu, co-founder and CEO of Theta Labs. “Theta NFTs are rooted in giving fans and collectors unique and tangible benefits, and our collaboration with Katy – one of the world’s most successful and creative artists – was no different. Throughout 2022, we look forward to imagining new ways to connect Katy Perry fans to the metaverse and the exciting world of NFTs”

Theta Network’s NFT marketplace, ThetaDrop, is powered by the Theta protocol and a native blockchain that is significantly different from other NFT platforms as it was purposefully built for media and entertainment. The cost of minting NFTs and gas fees are significantly lower on the Theta Network and transaction times are 100x faster than on Ethereum. More importantly, the Theta protocol is built from the ground up on a proof-of-stake (POS) model and therefore uses a fraction of the electricity and resources making it greener, and environmentally friendlier than other alternatives.

With the launch of the Theta Mainnet 3.0 protocol upgrade last year, Theta’s distributed network of more than 100,000 global community-run edge nodes continues to grow quickly. In the future, Theta edge nodes will support decentralized NFT storage enabling users to truly own and take custody of their NFTs, and not depend on any centralized platform. Cross-chain bridges between Theta Network, Ethereum and other blockchains will enable seamless NFT transfer across marketplaces, notably Ethereum-based Opensea, Nifty Gateway and others.

Katy Perry has racked up a cumulative 50 billion streams alongside worldwide sales of over 48 million adjusted albums and 135 million tracks. Her 2019 single, “Never Really Over,” off her latest album SMILE, is certified PLATINUM and was the biggest streaming launch of Katy’s musical career. 2020’s SMILE release has sold over 1.25 million adjusted albums, with nearly 2 Billion combined streams to date. Views of her 2013 video “Roar” and 2014 “Dark Horse” have recently surpassed three billion views – making Katy the first female artist to reach this milestone. Katy’s 2015 Super Bowl performance is the highest-rated in the event’s history. She is one of only five artists in history to have topped 100 million certified units with their digital singles – and the first-ever Capitol Records recording artist to join the elite RIAA 100 Million Certified Songs club.

Aside from being one of the best-selling musical artists of all time, Katy is an active advocate of many philanthropic causes. In 2013, Katy was appointed a UNICEF Goodwill Ambassador and has used her powerful voice to ensure every child’s right to health, education, equality, and protection. Katy has also been a champion for LGBTQ+ equality, and has received numerous awards for her work, including the Trevor Project’s Hero Award in 2012, the Human Rights Campaign’s National Equality Award in 2017, amfAR’s Award of Courage in 2018, and Variety’s Power of Women Award in 2021.