By taking an existing culture and community with shared views and perspectives, and giving them a home in Web3- MICE is endeavoring to create a digital Community that is built on a stronger foundation than has been seen before on the Blockchain.

The project will give its holders the medium and tools to shape, contribute, and create the first decentralized Media Network – MICEMEDIA. An interposed brand that is not only built by but owned by the MICE.

We already know that the ‘web’ has developed in phases.

From Web1 and ‘websites’ to Web 2’s ‘peer to peer’ era of social networks to this moment- one which is defined by an ecosystem built on the blockchain and limitless potential. With each phase of the web has brought with it innovative advancements in technology that have shaped society, culture, and the world.

These phases have been governed by centralized systems and platforms – with the intention of shaping and censoring opinions to control the narrative of society to their own benefit. Creating a system of forced polarization that divides the people… all the benefit of the platform.

That is, until now.

MICE + MICEMEDIA is planning on raising the bar and delivering on the true promise of decentralization in Web3.

THE CORNERSTONES: Community, Utility, and Value

With a community-centric approach, MICE has the idea of taking the way NFT projects have built Community in the past and flipping the script. Rather than releasing ‘art’ and a loose ‘Roadmap’ to curate a Community without meaningful ‘glue’ or real connection – MICE plans to tap into an existing in real life (IRL) community and culture and give it a home in Web3.

The project will provide the traditional mediums of communication to its Community and supporters – but with MICE the value of communication has more meaning and value. The founder has described this as ‘Discord with Discourse’- a Community with a shared perspective communicated on topics that have far more depth than your average NFT chatroom.

Just as the days of NFTs ‘dropping a jpeg’ have passed, so has the legitimacy of a low-quality video game ‘coming soon’ or a ‘game’ passing as ‘Utility’.

While MICE will deliver on traditional Utility such as IP ownership, streaming activities, IRL events, merchandise, and so forth- they plan to elevate the standard massively in their true Utility.

The core focus of this Utility is on building the first decentralized Web3 Media Network, created and crafted by the MICE Community.

The Project will provide a media content platform to the Community, and offer the ability to interact, vote, and contribute to the media, therefore shaping the culture and brand of a true Community created Media Network.

The Manifestation: MICEMEDIA. A Digital Media Network and brand that is the outward-facing product built by the MICE.

This brand which will be built by the Community is able to accelerate online IRL in a powerful way. Co-Founder of MICEMEDIA, Chris Crane, has spent the last three decades as a media executive building some of the most notable networks in the US.

His ventures have been diverse and have had success working with brands like ESPN and iHeart Radio, and building mainstream syndications from The Steve Harvey Radio and the Dan Patrick Show to news media platforms like the chart-topping Dan Bongino Podcast and Levin TV. Most recently, Chris founded the company that went on to become the news network ‘BlazeTV’.

With the culture and foundation built by the Community, the MICE team will be able to organically and rapidly build this Utility into a remarkable, respected, and revolutionary MICE MEDIA Network.

The way in which NFTs are valued was a problem in the eyes of the MICE Founders. Confined to ‘perceived value’ through things like ‘scarcity’ and ‘rarity’ with weak Utility was  ‘not enough for the MICE Community’ in the eyes of the team. They meticulously layered their ‘three levels of value’ to maximize the digital asset for the Community and provide future holders of MICE with the most value possible.

1.  TRADITIONAL VALUE. The art of the NFT itself is derived from a thematic storyboard that is intertwined with the ethos of the project. Along with this comes exclusive IP rights, access to streaming events (beginning on Nov 6), IRL events (MIAMIMICE / APR 2023), merchandise, and a thorough approach to fundamental Web3 offerings.

2.  FUNCTIONAL VALUE. Will include the unique Community that is going to be assembled, and the access and ability to interact and contribute to the content in a revolutionary approach to the creation of a living Media Network.

3. ‘TRUE VALUE’ IRL. This is where MICE is aiming to directly democratize an industry that has forever been dominated by big tech and large corporate networks. The MICE Team is now exploring the most impactful way to have the NFT that the Community holds be tethered to equity and a stake in the Media Network- having a true share of the Media Empire they are building. ‘Web3 NFT’ value + ‘IRL Equity’ in a Media Network is industry-disrupting, and a principle that the team holds as sacred and will reward the Community with this offering.

‘Power of Aligned Interest’. The Community will have the power to project media content that they believe in and is reflective of their culture in Web3, and that content is shared throughout Web2 and online. When this exposure permeates across the market, the value of the Media Network will logically increase. As that Media Network value increases, so does their share in that entity… as well as the rise in notoriety and value of the NFT. In what is forming to be a ‘Contribute to Earn’ model, there is a remarkable presence of aligned interest in the promotion of media content that has never been seen before.

A MICE intern may have said it best when he stated, “we are a media network built by ‘the MICE’- not by the ‘the Man’.”

THE MICE are ‘Building a Bridge’

The MICE team supports the assertion that Web3 will only reach its fullest potential when it has mass adoption from the general market at large and has geared itself that way.

The way that the MICE envisions this will happen is not through ‘better art’, but rather, by a project breaking through the barrier and triggering an emotional connection to a specific NFT. There may not be a deeper emotional connection any individual has than their views, belief system, and values. MICE has intentionally scheduled their Mint around a highly covered election in the US this November. Creating a connection between an existing Community in Web2, and a thriving Community in Web3.

The team has split their marketing spend between Web3 media and traditional media. Convincing people to understand new technology is not a light lift; but the founders have attracted mainstream PR through exposure on television networks, IRL influencers that have taken MICE as their first NFT, and simplified the message of what the blockchain is in their communication with media. This paves the way for an extremely exciting bridging of the gap.

To break down even more barriers, MICE has made it easier to enter the market. Downloading a digital wallet, purchasing ETH, and understanding gas prices- the team aims to alleviate this cumbersome process through a method of purchasing the NFT using a credit card!

“It is not so much an opportunity to build a bridge from Web2 to Web3, but a responsibility to the industry we believe in deeply” – Bryn Davis, Co-founder of MICE.

Elevating the Expectations of Web3 Projects

The MICE brings a level of integrity, value, intention, and deliverable Utility from a team that has a history of executing at a high level in a way that has not often, or ever, been seen in Web3.

A giant step forward from an ‘art project’- the wildly positive response to the ‘art’ of the NFTs from Communities such as Bored Ape Yacht Club and Meerkats was in a way… ‘unintentional’, as the team is focused acutely on Utility and true value for the MICE Community.

The next iconic media brand will emerge out of Web3, and MICE + MICEMEDIA is prepared to disrupt and revolutionize the way Media Empires are built. 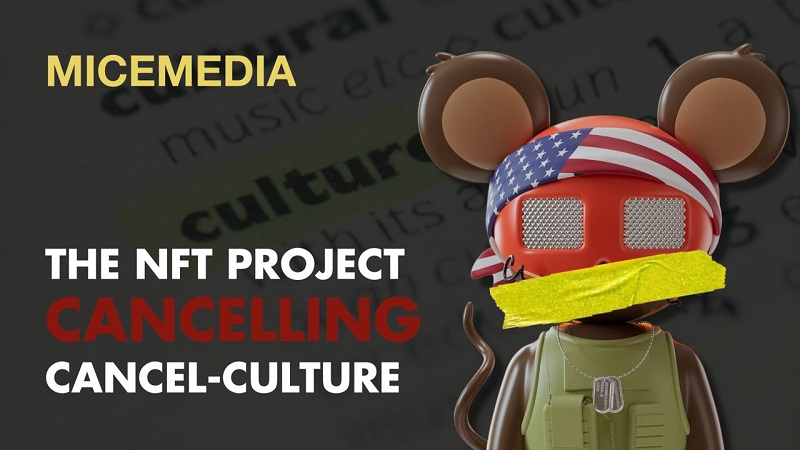