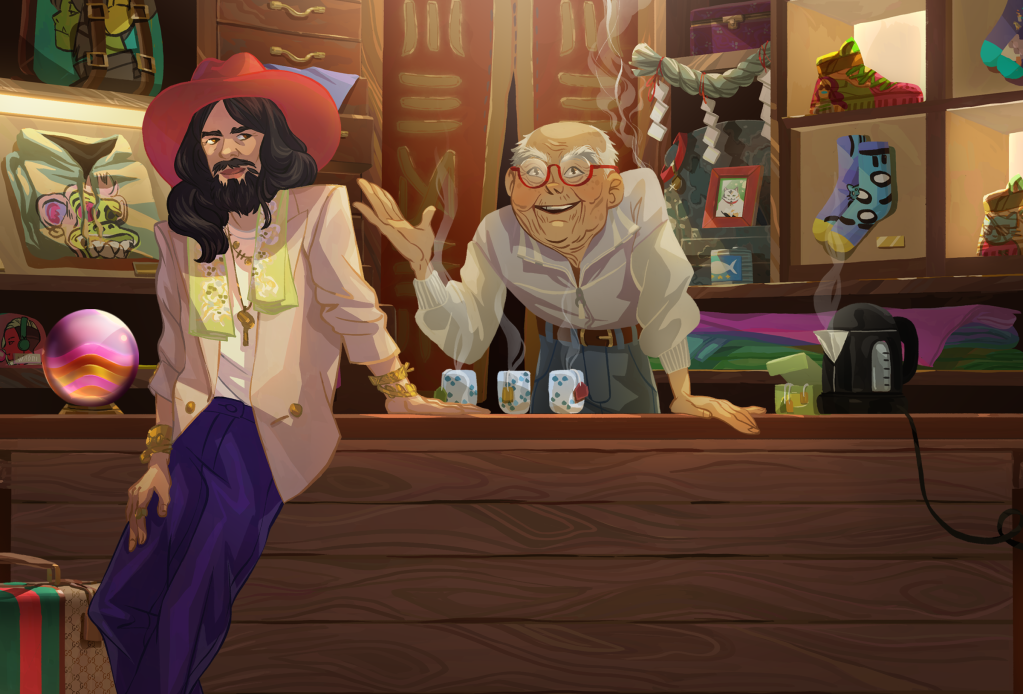 MILAN — Gucci is bringing customization to a new level, designing a digital identity in an alternative virtual world, generated through the codes of the brand.

The luxury group has collaborated with virtual shop 10KTF to create the “10KTF Gucci Grail” project, a new NFT initiative that is taking place in the brand’s experimental space Vault.

Digital outfits are customized for those who already own a PFP, or an NFT profile “Picture for Proof” used by collectors as a portrait, or as an expression of artistic and technological talent. Bored Ape, World of Women and Cool Cats are among some of the 11 NFT selected collections.

As per the project, Gucci’s creative director Alessandro Michele‘s avatar travels in the New Tokyo metaverse, invited by digital artisan Wagmi-san to his virtual shop, creating two outfits in different colors, inspired by the Aria and Love Parade collections, respectively. The clothes are reserved for those who want a personalized Gucci outfit to wear in the parallel digital worlds.

Over the past few days, the icon of a crystal ball, a gift donated by Michele to Wagmi-san, was offered to three groups of people — those who already own a PFP, those who are part of the Gucci Vault community on the Discord platform, and those who already “live” in New Tokyo, where Wagmi-san is based.

Those who have redeemed the magical globe have been able to use it to see the outfits, choose them and receive the customized digital avatar representing them in a total Gucci look, created in the meta-atelier of Wagmi-san.

On Thursday, the last part of the project will allow those who have the crystal bowl to receive their PFP personalized with the chosen Gucci look.

All this is especially timely. As reported, the first Metaverse Fashion Week kicks off on Decentraland on Thursday featuring catwalks, virtual retail storefronts, immersive experiences, arty spaces with fashion and music, panel talks and other events. More than 60 brands are on deck to participate in Metaverse Fashion Week, including Tommy Hilfiger, Dolce & Gabbana, Elie Saab, Nicholas Kirkwood, Perry Ellis, Imitation of Christ, Estée Lauder, Etro and many more, with several setting up shop in digital stores that visitors can teleport to and browse.

As reported, The Gucci Vault has been playing host to a series of crypto-based projects, including NFT drops such as the SuperGucci collaboration with Superplastic.

Gucci teamed with the creator of animated celebrities, limited-edition vinyl toys and digital collectibles to unveil SuperGucci, a three-part drop including NFTs and ceramic artworks. The project also includes Superplastic’s animated celebrity artists Janky and Guggimon in the Gucci Vault.

Gucci has also launched on Discord to foster open conversations with the community about what’s next for the experimental space.

Vault will continue to present monthly drops of rare vintage finds, as well as a regular rotation of exclusive capsules, special collaborations and new brands.

This is the latest metaverse initiative for Gucci, which last May participated in Christie’s online auction, Proof of Sovereignty, curated by Lady PheOnix, one of the leading voices for contemporary digital art and culture in the new media landscape.

Gucci was present with its first NFT, with artwork conceived using digital animation drawn from Gucci Aria, the house’s fashion collection that marked its 100th anniversary in 2021. The fashion film was codirected by Michele and award-winning photographer and director Floria Sigismondi.

The artwork underlying the NFT recognized Aria’s overarching message of a yearning to bloom and flourish after the shadow of winter has passed and this visual tale brought Gucci into a new media space. The starting bid was $20,000, but the NFT was sold in June at $25,000.

Also, Gucci sold a digital version of its Dionysus bag on Roblox for about $4,115 on the secondary market last August, which is roughly 20 percent more than the physical object.