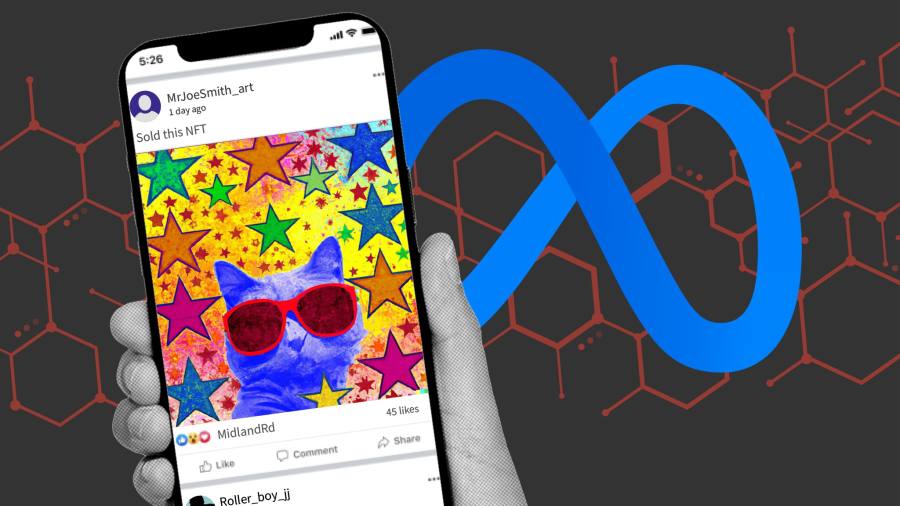 Hello and welcome to the FT Cryptofinance newsletter. This week we’re taking a look at Meta’s push into non-fungible tokens.

If it’s been a painful year to own cryptocurrency, it’s been even worse if you had spent money on buying a unique digital collectible known as a non-fungible token.

While flagship tokens bitcoin and ethereum have merely lost about 70 per cent of their value, the average price observed on the markets of all NFTs traded has dropped 85 per cent this year to $154 in the third quarter, according to data tracker NonFungible.com.

These tokens usually represent art or memorabilia, so artists and sellers have more control over the ownership and sale of their work. Theoretically, it gives them more financial freedom, even if the art is just questionable pictures of unenthusiastic apes.

But the bottom has dropped out of the market as the crypto bubble popped, buyers lost money and got a better understanding of what it really means to own a digital image online.

Faced with such profound uncertainties, it would take a particular kind of bulletproof optimism to go big in the NFT market right now. Enter Meta Platforms.

This week, the company once known as Facebook said creators will be able to make their own NFTs and sell them directly to fans, both on and off its Instagram platform.

If anyone is impervious to doubters, it’s Meta. Chief executive Mark Zuckerberg has spent nearly $10bn on building the Web3 and metaverse so far this year and will spend even more next year. Investors have slashed 75 per cent off the value of the company this year in horror at the size of its experimental bets, but it ploughs on. The FT first reported the company’s intentions back in January so Zuckerberg and co have had plenty of time to rethink their plans.

Charles Storry, co-founder and growth lead at crypto index platform Phuture, told me he believed Meta’s decision was an “attempt by Meta to save themselves from another terrible quarter . . . the chatter in the industry is this is a desperate attempt to bring some level of excitement for investors”.

Clearly, it’s going to take more than an embrace of NFTs to recoup the $89bn from Meta’s market capitalisation, but the company seems committed.

The announcement came alongside Creator Week, a Meta initiative that features events designed to help creators grow, connect, and build their careers. Over on Facebook, the company’s “Stars” feature is being expanded to let users pay creators when they rate their content.

Could Meta’s interest revive the NFT market? A big-name buy-in with massive distribution may provide the missing boost that’s missing in NFT-land these days. But ether and solana, the tokens most linked to NFTs, are flat.

Questions over timing — and indeed the point of NFTs — are still just as relevant. The retail investors who got burnt are not flooding the markets any more.

To the extent an NFT market still exists, the social media giant wades into a market stuffed with competition, including established crypto-native marketplaces such as OpenSea, Rarible, SuperRare and LooksRare . . . the list goes on and on. Rival social media platform Reddit also launched a “collectible avatar” marketplace in the summer. Instagram isn’t even getting first-mover advantage.

And then there’s Meta’s brand reputation to consider. Operators of NFT marketplaces need to be wary of insider trading, and whether certain people were getting a tip on upcoming NFT sales. Another risk is wash trading, when the same party is both seller and buyer, generating extra fees for no economic purpose. Regulators have long had concerns over Meta’s commitment to privacy and ethics. It needs to show it has changed.

The problem for the market though is: who is bigger than Meta? If its embrace of NFTs can’t save the market, then maybe it’s all over for good. But what do I know? Perhaps I’ll have fun staying poor.

What’s your take on Meta’s new NFT policy? Will it provide a much-needed resurgence to the niche market? Email me at [email protected].

Ethereum co-founder Vitalik Buterin spoke on what has become talk of the “digital town square” this week: whether Twitter should charge money for those who have a “verified” blue tick against their profile (full disclosure: I have one too).

“How well this works depends on exactly how much due diligence is done to make sure blue checks are who they say they are. ‘Pay $8/month and call yourself whatever’ would damage the blue check’s anti-scam role.”

The price of joke crypto token dogecoin is soaring as Elon Musk finalised his takeover of Twitter.

Musk has been a longstanding fan of the dog money and his ascendancy to “Chief Twit” has dogecoiners excited.

Numbers shared by data provider CryptoCompare show the token’s value has increased more than 100 per cent since the start of October.

“Some people are taking Musk’s tweets as a sign of intent to connect Twitter and dogecoin, which is driving a huge spike in activity,” Edmond Goh, head trader at crypto liquidity provider B2C2 told me via email.

Albeit a small timeframe, this also paints a stark contrast to the “serious” cryptocurrencies that have been stuck in a post-crash freeze for months. It also shows what even a semi-coherent narrative can do for crypto tokens — the kind of special sauce that’s been missing across the industry’s more popular coins for months.