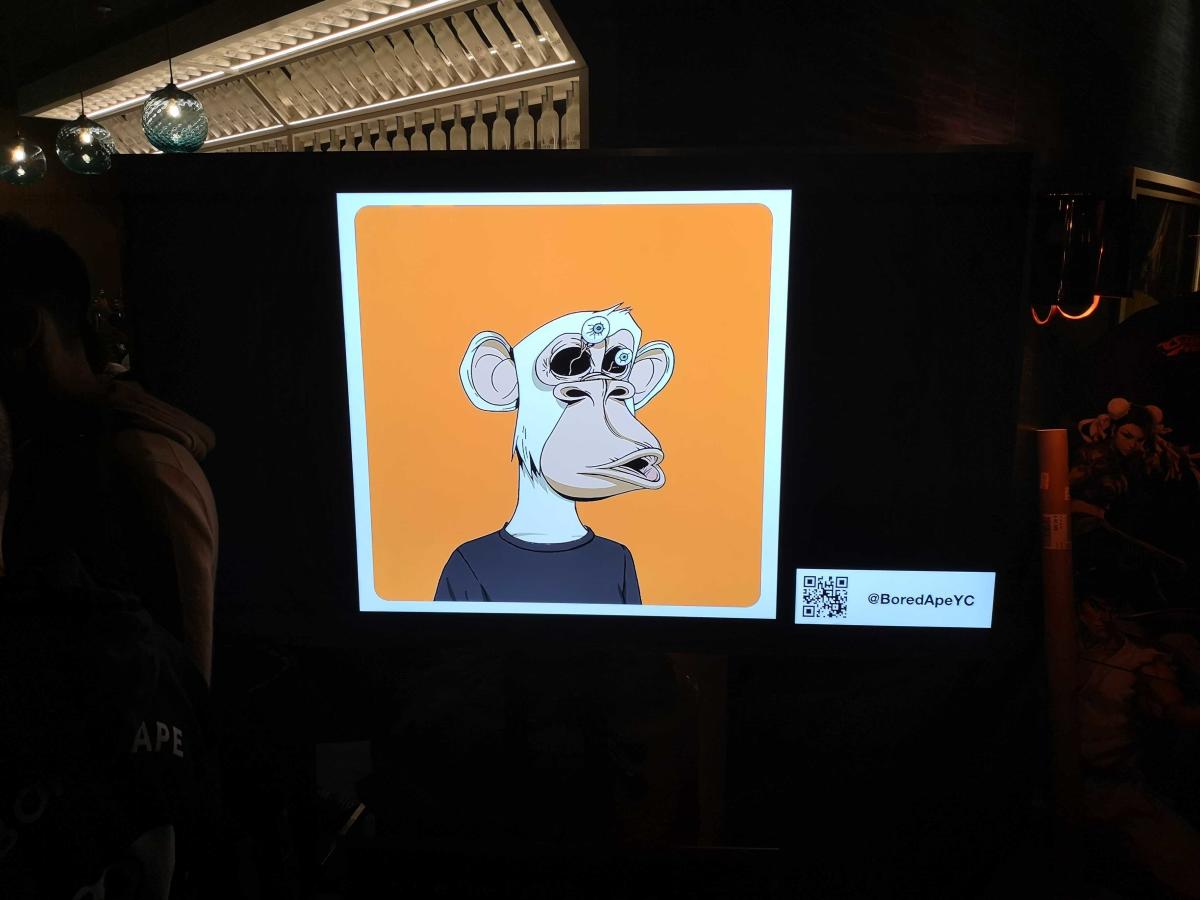 Rain hammered down on Londoners on Wednesday night as they trudged stoically through grimy puddles and traffic roar. But, I slipped through the flow of outbound commuters in the opposite direction, having been offered the opportunity to glimpse inside the world of an exclusive club near London’s Victoria Station.

Those allowed into the VIP event are the privileged holders of a digital illustration of a cartoon ape, a Bored Ape Yacht Club NFT, which in the crypto-world allows access to a high-end clique of wealth, influence and insider knowledge.

The scramble to be part of the club, whose members include Eminem and Paris Hilton, has seen each cartoon ape illustration soar in value to a high water mark in September 2021 of $2.25m before collapsing amid the ‘crypto winter’ to the current $100,000 price tag.

In the crypto-ecosystem first impressions are deceiving, on the surface each illustration is just a daft ape drawing, but behind each cartoonish face is a unique piece of code locked on the blockchain, a “smart contract” that only the owner has access to.

This code is what makes the illustration an NFT, a unique asset.

Let’s investigate what life is like inside the Bored Ape Yacht Club (BAYC), and whether it’s worth the cost of membership.

I stand out immediately, as most of the people I first encounter are decked out in attire that features the white Bored Ape skull logo.

The dancefloor of this venue, which has been described as “the world’s first Bored Ape Bar“, is packed with groups who own an NFT with a price tag that could buy a house outright in my home town.

I see many heads locked close in conversation, maybe about crypto projects I should know about, so I make my way through the throng with an ambition to engage the first person I make eye contact with. However, I get distracted by a free glass of wine from one of the many smartly dressed waiters.

Refreshment in hand, I meet a BAYC holder, Lannie Lee, who travelled to the event from China.

To get into these exclusive BAYC events you need to own an NFT that costs hundreds of thousands of dollars and so my first question to this crypto-founder was: “Is it worth the money?”

Lee is the co-founder of Mecca Lab and Hangout Metaverse, a decentralised Metaverse that enables players to build and monetise gaming experiences.

Read more: Crypto: What is ApeCoin?

She said that apart from access to exclusive clubs, BAYC holders “earn” a lot of extras in the form of airdrops of connected NFTs and even BAYC’s native cryptocurrency apecoin (APE-USD).

Lee added: “Holding just one Bored Ape NFT allows community members to earn a lot of extras as the ‘brand’ grows. Airdrops include thousands of dollars of the apecoin cryptocurrency, virtual land in the Bored Ape metaverse, called Otherside, and Mutant Ape NFTs.”

Bored Ape holders are able to “mutate” their normal Bored Ape with an additional free digital asset, called a Mutant Serum NFT. This makes the illustration look like it has been dipped in toxic sludge.

During the release of the Bored Ape apecoin cryptocurrency, BAYC holders were eligible to claim up to 10,094 apecoins, around $40,000 at today’s prices, while holders of the derivative Mutant Ape NFT were eligible for 2,042 apecoins.

The crowd is international with BAYC community members having flown in from countries such as Spain, the US, China, Japan and Mongolia.

And the music? Let’s just say it ain’t country. The pulsing beats are provided by DJs from Dcentralized, a web3 dance-music collective.

The headline act of the evening was Spottie WiFi, a multi-million dollar selling “CryptoPunk rapper” who belted out sharp lyrics about the crypto space.

Spottie WiFi, aka Miguel Mora, has collaborated with hip-hop stars including Bun B and is a forerunner of what he terms “the NFT music revolution”.

Spottie told me that he and other artists are using NFTs to deliver their music to fans without any gatekeeping from traditional music industry middlemen like record labels, publishers, streaming platforms.

He said: “Web3 community means artists don’t need millions of fans; they only need a few hundred to earn a decent living. In fact, it’s the centralised platforms and middlemen like Spotify (SPOT) and TikTok that need millions of users, not the artists.”

My next encounter was with a German NFT aficionado, who had recently purchased a Bored Ape NFT and was at his first BAYC event.

Read more: What are zombie cryptocurrencies? 10 ‘undead’ crypto tokens left on the shelf

“The particular use-case of Bored Ape NFTs is that it provides access to an exclusive private club where you get insider information about the crypto-ecosystem. I’m here to learn, there are some smart people in this room”, he said.

As in many sectors of the crypto-space, he did not wish to be “doxxed”, which means to have his identity revealed.

Participants of BAYC meetings are renowned for their combination of wealth and insider knowledge on the latest developments in crypto.

This view was corroborated by another BAYC member, who also wished not to be “doxxed”. He wore dark glasses, a mask, a luminous green hat and a bright red clown’s nose. The disguise included an accompanying similarly attired NFT avatar.

He said: “Look at the smart people in this room, they’ve grasped the potential of web3.

“Look, I’m an example of what web3 can do for people. I was a teacher for 20 years. I invested early in the Bored Ape and CryptoPunks NFT series.

“Now I’m working for the CEO of Vaynermedia Gary Vaynerchuk, this is the great equaliser, a level playing field where people do not care about class, gender, ethnicity or sexuality.”

Sang Vu, a crypto-influencer who is also an advisor to London’s vibrant DLT Hub, said: “Here we have a unique and diverse concentration of early adopters in the web3 sector.

“They are composed of investors and collectors who are passionate about NFTs as a new art form. But to them it is more than just art, it is a sense of belonging and access to a like-minded community of individuals, and possibly an antidote to the crisis of loneliness that has intensified due to the coronavirus lockdowns.”

The founders of Arcade Apes, which is the official name of the BAYC-themed bar, Vishaal Hindocha and Samit Max Patel, are both Bored Ape NFT holders, which gives them the intellectual property rights to use the ape image and name as branding for the venue.

Hindocha said: “My business partner and I have founded this to be the hub for those into NFTs and Crypto.

“We’re looking for other projects to make this a collaborative effort across the web3 community and are already in discussions to take this globally.

“Our logo features our Mutant Ape, and the Mega Mutants on the display within the bar area go for around $4m each.”

But would-be burglars should think again, as the NFTs on display are but digital representations, and the real value is in ownership of the smart contract code that is securely deployed on the Ethereum blockchain.

By most metrics, BAYC is the most successful NFT art collection to have come out of the retail frenzy for NFTs. BAYC’s current market capitalisation is valued at around $1.1bn, according to CoinGecko.

Read more: Crypto could be at risk from EU’s new ‘kill switch’

But this NFT range has now become a “decentralised brand” where holders of each NFT also have the intellectual property rights to exploit the name and recognisable cartoon ape face however they wish.

So NFT holders can create anything with the ape face and name, such as a bar, clothing range, or even an animated series of films. This is one of the main drivers of value, increasing the demand for one the 10,000 BAYC NFTs that exist.

Yuga Labs, the developer foundation behind the Bored Ape Yacht Club series, did not immediately respond to Yahoo Finance UK’s request for comment.

Watch: This AI tool could kill human creativity and is worrying the art world | The Crypto Mile