Beyond OpenSea: Our guide to to the biggest NFT marketplaces 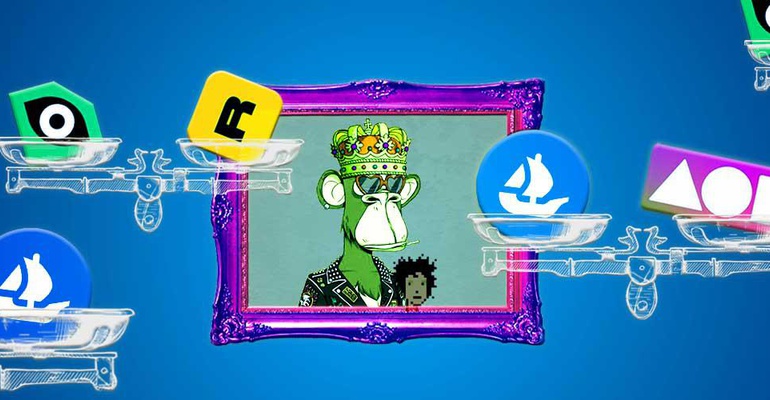 OpenSea is the undisputed giant of the NFT realm. The website was the first marketplace for non-fungible tokens and is also the biggest in terms of traffic and valuation — the company recently raised $300 million in new funding at a valuation of $13.3 billion.

However, the site has had its share of growing pains. A scandal over insider training, high-profile attacks on users, and bans on Iranian users may leave openings for OpenSea’s many competitors to capture a stake in the NFT market, estimated to be worth tens of billions of dollars.

Some of OpenSea’s competitors offer different approaches on the business side. Curated art marketplaces like Foundation and SuperRare attempt to showcase exclusive artists, while decentralized marketplaces like LooksRare and Rarible distribute their fees back to the users rather than keeping it for themselves. Still more marketplaces operate on smaller blockchains, or service specific projects.

According to social media information provided by our parent company, Thinknum Alternative Data, Opensea both has the most Twitter followers in the NFT space and has shown the biggest growth over the past six months compared with competitors.

Here’s our guide to the NFT marketplaces you should know about, and what they’re bringing to the Web3 table. Quick disclosure: I have purchased and sold NFTs through OpenSea, and not through any of the other sites referenced here, but I have no affiliation with the company except as a user.

The first and the largest NFT marketplace, OpenSea has taken a formative lead among its competitors. Its latest funding round, led by VC firms Paradigm and Coatue Management, saw the four-year-old company valued at $13.3 billion.

OpenSea’s model is simple: the company keeps a 2.5% cut of every NFT transaction made on its marketplace. The trading volume on Opensea last month was nearly $2.5 billion, giving OpenSea an approximate revenue of $62.5 million — not bad for not selling any physical assets, or launching any significant new features.

OpenSea currently operates on two blockchains:Ethereum, which is the foremost blockchain for buying and selling NFTs, and Polygon, a so-called “Layer 2” or “sidechain” system that works on top of the Ethereum blockchain to allow for transactions with lower fees and faster speeds. OpenSea is also expected to introduce support for Solana, an Ethereum competitor with its own developing NFT ecosystem.

The platform is also relatively easy to understand for people who are new to NFTs and has a sleek and information-rich user interface. Sales can take the form of auctions or direct listings, and users can view their NFT collection on their profile page. OpenSea also supports a wide variety of crypto wallets, including MetaMask, WalletConnect, Coinbase Wallet, and twelve others.

While cryptocurrency and Web3 evangelists often cite decentralization as a central tenet, OpenSea can look a lot like a Web2 company operating in the Web3 space. Rather than distributing its fees back to users or giving users the option to vote on business decisions, as some marketplaces do, OpenSea operates like a typical tech company.

One implication of this is that OpenSea will take action to freeze assets when they are reported as stolen, and not allow them to be bought or sold. Truly decentralized platforms tend to stay hands-off in these situations. Although in theory OpenSea’s approach should protect victims, in practice the policy results in unwitting buyers getting stuck with assets they didn’t know were stolen.

OpenSea has run into other snags as well. OpenSea lost its head of product, Nate Chastain, over an insider trading scandal, after he was suspected of profiting by snapping up NFTs from projects shortly before they were promoted on OpenSea’s website.

The platform also recently banned Iranian users from using the marketplace in accordance with international sanctions, greatly angering its Iranian artist community. The site has continued to struggle to curtail plagiarism and copyright infringement on its marketplace, again needing to weigh the risks between stepping in as a consumer-friendly central authority and catering to constituencies who would like to see it become more decentralized.

While OpenSea’s focus is on maximizing volume of both buyers and sellers, Foundation’s strategy is more about exclusivity. Anyone can buy an NFT for sale on the marketplace, but artists must be invited by community members to join the platform.

If OpenSea is Etsy, catering to anyone who wants to buy or sell NFTs, Foundation envisions itself as an NFT-focused version of Christie’s or Sotheby’s, curating high-quality collections for a distinguished clientele. The Internet-iconic Nyan Cat, for example, was sold as an NFT on Foundation, garnering 300 eth —nearly $600,000 at the time, but over $1,000,000 today given the rise in ether’s value.

Foundation currently only supports Ethereum NFTs, and takes a 5% fee of all transactions. The company’s website claims that artists have made nearly $200 million from selling NFTs on its platform, which would net the company $10 million in revenue since its inception.

While Foundation has seen a respectable sales volume, it has struggled to grow the number of users consistently visiting the site. According to web traffic data from Thinknum Alternative Data, OpenSea and, to a lesser extent, Rarible have a significant lead in web traffic over Foundation.

Next up we have the ‘Rare’ squad, three marketplaces with similar-sounding names but different business and curation models. SuperRare is the most similar to Foundation, curating a selection of artists to sell NFTs on the Ethereum blockchain.

Both SuperRare and Foundation are home to artworks that look more like traditional art than a lot of the business- or gaming-oriented projects on OpenSea. SuperRare operates primarily on an auction-based system, and the platform takes 15% of the initial sale and 3% of subsequent sales as a fee.

This work, entitled All Time High in the City, was originally sold in November 2018 by pseudonymous digital artist XCOPY for .5 eth, around $1,600 today. Three years later, it sold for 1,630 eth — nearly $6.2 million at the time.

However, in contrast to Foundation, this fee doesn’t go to a traditionally-structured company. Instead, SuperRare is operated by the SuperRare DAO, or decentralized autonomous organization, which votes on proposals governing the marketplace using $RARE tokens that were distributed to prominent artists and collectors on the platform.

This means SuperRare is following a Web3-style approach to running the platform, distributing fees back to the community and relying upon a diverse coalition for governance rather than handing leadership over to a CEO or a board of directors.

LooksRare and X2Y2 combine both OpenSea’s strategy to welcome all sellers and SuperRare’s fee-redistribution and governance strategy. LooksRare only deducts 2% of a sale as a fee, 20% lower than OpenSea, and redistributes those fees to stakers of the platform’s $LOOKS token, including the platform’s pseudonymous founding team.

To put it as simply as possible, LooksRare rewards users of its platform and true believers in its business model — those who are willing to put cryptocurrency tokens on the line — by redistributing the fees it takes from NFT trades to those users. While the platform has seen an impressive volume in sales, some have raised concerns that the volume consists largely of wash trading by users aiming to earn rewards through buying and selling NFTs back and forth with each other.

X2Y2 follows a similar model to LooksRare, and both platforms launched by airdropping their respective tokens to the most active users on OpenSea, attempting to siphon off its user base.

Founded in 2019, the Los Angeles-based Rarible is yet another NFT marketplace, notable for servicing four different blockchains: Ethereum and Polygon, which OpenSea also supports, but Tezos and Flow as well. Rarible also follows a decentralized governance structure, allowing holders of its $RARI token to vote on proposals governing the marketplace.

Rarible takes the same platform fee as OpenSea, 2.5% on every transaction. However, Rarible allows NFT creators to set their royalty fees at up to 50%, while OpenSea and most of the other marketplaces, limit royalties at 10%. Royalty fees allow NFT creators to continually benefit from secondary sales of their NFTs — a 50% royalty would see an NFT seller only receiving 47.5% of the winning bid after the royalty and platform fees were levied.

In this chart comparing the growth of OpenSea and Rarible’s Twitter followings, the two marketplaces show similar trends, though OpenSea has a clear lead.

In brief: MagicEden and Solanart cater to NFTs on the Solana blockchain. Nifty Gateway has sold pieces by NFT giants Beeple and Pak, and has been acquired by the Winklevoss twins, owners of the Gemini crypto exchange. Mark Cuban has backed Mintable. MakersPlace has funding from Sony Music and Eminem. Top-tier NFT projects Cryptopunks and Axie Infinity have their own marketplaces.

Suffice it to say, there’s a robust marketplace of marketplaces to choose from, both as an NFT collector and an NFT artist. What remains to be seen is whether OpenSea will survive its growing pains and crush its competition, or whether the company merely rests on a shaky foundation.