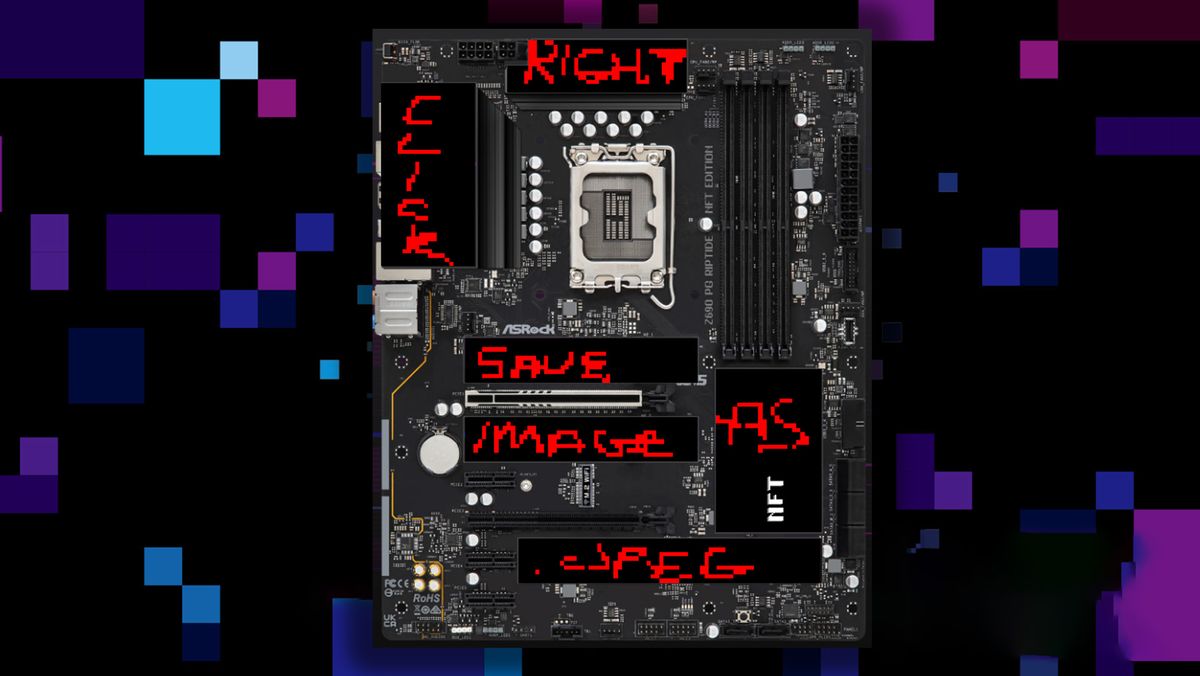 Motherboard manufacturer ASRock is no stranger to the Non-Fungible Token (NFT)—the company recently released its own Phantom Gaming Evo logo as an NFT on OpenSea and claimed that made it a part of ‘the metaverse’ for reasons not yet clear. Nevertheless, its latest event is somehow even more baffling than that: ASRock is making an NFT motherboard.

The ASRock Z690 PG Riptide NFT Edition is “a decentralised motherboard”. That doesn’t really mean what you think it might, and in actuality is simply code for a motherboard designed by a bunch of people on ASRock’s hastily put together MS Paint-a-like app.

That’s right, you go online, design your own motherboard, and then three winners of a separate sweepstake will receive the finalised design on a real-life motherboard.

Now it gets a little confusing here because the design is currently just a big mess of random colours. That’s because each pixel has to be voted on by the majority of users, and there are 4,309 pixels requiring their input. The reality of it is that so far there’s no real designing going on, and it’s more or less just a free-for-all of random colours.

And it gets more confusing than that. According to the ASRock website: “Once a new design is done, 5 designs from you and others will be drawn randomly, and if at least 3 designs are identical in the same pixel, the pixel turns to that color.”

Each design will be exported each day, for 20 days, and those 20 designs will be minted as NFTs. Then the final outcomes of day 1, day 10, and day 20 are set to be turned into the Z690 PG Riptide NFT Edition motherboard.

An Ethereum wallet is required for entry, so we can assume these NFTs will be hosted on that platform. That means this NFT motherboard will be tied to a cryptocurrency network that uses a tremendous amount of energy in the form of GPU mining. The network is said to shift to the Proof-of-Stake algorithm sometime soon, one that’s far less power-hungry, but unfortunately that has not yet happened.

“Let’s bear witness to the evolution of this great art,” ASRock says, and I really cannot wait to see the results for myself. Perhaps there’s a chance that some patterns will emerge out of the chaos, but it’s really tough to say right now as it’s currently pure shite.