A New NFT Grouping Is Born: Minorities Promoting Their Cultures 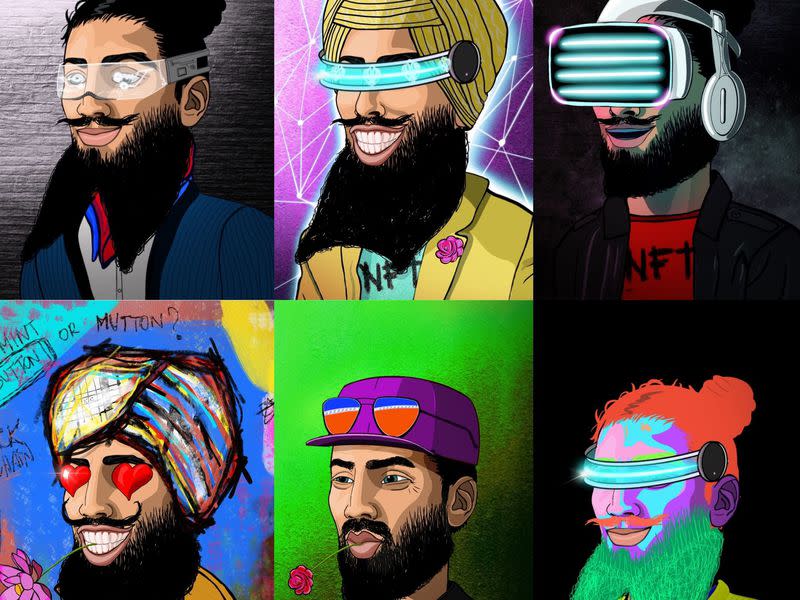 In July 2021, sitting in his home in Singapore, Amar Bedi had an idea.

He imagined a digital identity, a non-fungible token (NFT), that resembled him. Bedi is a turbaned Sikh, an identity associated with Sikhism, the fifth-largest faith in the world.

Bedi visualized an NFT platform that would capture the various identities of his people and provide representation to an under-represented community in the metaverse. It would be called MetaSikhs.

Around the same time in Los Angeles, Doaa Alhawamdeh and Karter Zaher were enamored by a similar idea – bringing the NFT world the “first token” to represent Muslims in the Metaverse. They decided the NFT would be called Hijabi Queens and Bearded Kings.

There was no coordination, no idea of the other’s existence, no collective movement, and yet, in Montreal, Oren and his wife Rebecca, had also envisioned a strikingly similar project – “the first Jewish NFT project.” They called it “The Kiddush Club,” a collection of 3,600 digital art “mensches.”

The couple, who asked not to share their last names out of concern for their privacy, chose the name the “Kiddush Club” since it is also a slang term for Jewish adults who socialize in a fun way during or after Shabbat prayer services.

At their core, the ideas behind these different NFT projects are motivated by a similar history of conflict.

Rebecca and Oren said their idea was born in part from conflict: the “crazy rise of antisemitism” in recent times. This even as Russia’s President Vladimir Putin said he would “denazify” Ukraine and commentators noted the irony that Ukraine’s president is Jewish. In the fog of war, identity and unity are major motivating factors for the couple.

“There’s been a lot of fear in the Jewish community, and we have been trying to educate people, protect the community and defend ourselves, but it’s hard. It’s been a lot to handle. Personally, it’s taken a big toll on me. So this was about bringing the community together in a fun way,” Rebecca said.

It wasn’t just an external conflict for the recently married couple. It was also internal after they lost their first child, a 4-year-old boy.

“You’ll notice in the project; a lot of different traits were designed. Some of them are inclusive of disability, so there are hearing aids and a wheelchair, along with different styles of Jews. Our son was born with a very complex medical disease. So, he was the inspiration behind a lot of this,” she said.

The creators of Hijabi Queens, Alhawamdeh and Zaher, are a Palestinian-Jordanian couple. Alhawamdeh’s motivation is also multifold, and a big part of it is the fact that her “grandparents were Palestinian refugees.”

“They were brutally forced into concentration camps in Palestine and sent out by force to the neighboring country Jordan, and that’s where my parents were born. In the ‘90s, searching for the American dream, my parents moved to America, and I was born in New York City,” Alhawamdeh said.

She explained how both of them came from “war-torn histories. Karter escaped war in Lebanon when he was 12 years old.”

The intent behind MetaSikhs, founded by Bedi, Karun Arya and D-jeetal (who operates under a pseudonym), was to “really understand this space and how NFTs really work,” but also history.

“This is a strong use case of creating awareness about who Sikhs are,” said Bedi.

The creators of these NFT projects were not aware of the other, similar projects, but expressed a collective sense of validation and excitement.

“I absolutely love it. As a matter of fact, our neighbors to our left and underneath us are Jewish, and we have had what we call family dinners (laughs). We have an awesome friendship with them. I personally love to see minority communities stick to their roots, beliefs as long as they are kind, and not trying to enforce it on their neighbors,” Alhawamdeh said.

Hijabi Queens is a multinational project. The LA-based founders searched online for collaborators, finding their artists in Colombia and a web developer in Bangladesh.

The projects are strikingly similar in aiming for representation in the global community and supporting subcultures within the communities.

MetaSikhs promotes Sikhs of all appearances – with or without a turban, with or without caps, different hairstyles and different styles of turbans, all of which are closely linked to different beliefs within the faith and associated with different degrees of traditional, cultural or historical sensitivities.

“We thought it would be really cool trying to picture all these different kinds of Jews. Whether you are Ashkenazi, Sephardi, religious or not religious, Orthodox, Reform or Conservative. I don’t even tend to like those labels. For me a Jew is a Jew, it doesn’t matter who you are or where you come from,” Rebecca said.

Is it just a token to represent a minority identity? I.e., is this like a CryptoPunk or Bored Ape, just with a different type of art?

The NFT creators emphasize that this is not just about the representation of a minority identity. For Bedi, MetaSikhs allows collectors a colorful and vibrant representation of their identity “to bridge global communities through art inspired by culture.”

The Hijabi Queens team is motivated by empowering Muslim women and how the NFT “serves to solidify a network of Muslim creators and entrepreneurs.”

Rebecca said, “while we hope the NFT acts as a digital identity for Jewish people in the same way that CryptoPunks or Bored Ape Yacht Club is a social signal.”

All three platforms promise a variety of additional resources to holders. For instance, access to certain channels in their Discord, IRL events, master classes and networking opportunities.

In terms of governance rights, holders of The Kiddush Club token (TKC) will have the ability to vote on which charities the club supports, and MetaSikhs plans to involve the community after it launches its first collection. Hijabi Queens has not yet revealed a governance rights aspect but has communication channels to encourage robust discussion to influence the future of the platform.

These NFT creators have faced scrutinizing questions about rug pulls and cultural appropriation for profit.

“A lot of people think this must be a scam. A big part of why we are doing this is to onboard a lot of new people and do a lot of education in the NFT space along with a sense of Jewish pride,” Oren said.

Bedi said that “for the amount of time we have invested, the intention was never that we would make x amount of money that would take us to the moon.”

Rather, the creators said, the project promotes cultural pride. While proceeds will go to their creators, a percentage of the gains will go to charity.

The Kiddush Club and MetaSikhs, as guided by their faiths, have both pledged 10% of their earnings to charity. MetaSikhs has also committed to reinvesting 5% of its primary sales in NFT art by emerging artists.

Education as a form of decentralized representation is also key to their vision. Rebecca said how “onboarding the community into Web 3” is a major aspiration, and it’s on their social channels where most of the education takes place.

The founders of Hijabi Queens have baked in an educational strategy to empower women by holding weekend classes to teach them about building wealth, crypto, financial freedom and NFTs.

“We had to start from the basics. Our sisters didn’t know what an NFT or crypto was. Now, in less than a month, these sisters are teaching others,” Alhawamdeh said.

The concept of education through visual identity is core to the tenets of the organizations.

“Each individual MetaSikhs NFT (2,112 unique collectibles) will include different traits, and we want each collector to think about every aspect of their MetaSikh and what it means to them to encourage a meaningful dialogue with others about art, culture and community,” Bedi said.

For Bedi and his team, MetaSikhs is a medium to create awareness about Sikhs, not just for others but within his community too.

“There is a loss of understanding around what it means to be a Sikh. While it’s easy to identify a turban and that becomes a core discussion topic – what does it mean to have one and be a Sikh – most people don’t know the core values within and outside the community, unfortunately. The three core tenets are meditation, earning an honest living and doing charity, and this gets lost under the more cultural influences of religion,” Bedi said.

The MetaSikhs NFTs reflect all the shades of Sikhs and therefore raise a question about which visual representation is in line with Sikhism. That question, in turn, leads to understanding what Sikhism is at its core and therefore awareness is created.

MetaSikhs is creating digital representations of female Sikhs too. Hijabi Queens has a roadmap for Bearded Kings. The Kiddush Club is also aiming to represent female Jews.

Rebecca explained how as a woman in a male-dominated NFT space, she is “really proud of working on NFTs to bring Jews in the metaverse.” She added that “there is now a new focus for women-focused projects” citing the NFT project World of Women (WoW) as one example. It has become a celebrity NFT phenomenon.

All three projects are hoping to partner with well-known individuals of their respective faiths to spread the word about the respective NFTs.

MetaSikhs is in talks with celebrities for partnerships, and both Hijabi Queens and Kiddush Club have secured celebrity partners.

The Club has partnered with Rudy Rochman, a Jewish-Israeli rights activist who was physically removed from a bus in London for being Jewish.

Hijabi Queens’ Zaher was originally a musician. He reconnected with his bandmate Jae Deen recently. The name of their band is Deen Squad. Deen means faith so the literal translation of the meaning of the band name is “faith squad.”

The band’s innovative “Islamic” versions of mainstream billboard megahits – such as “God’s Plan” by Drake and “Havana” by Camila Cabello achieved virality and attention from the likes of BBC and CBC. The two hope to leverage their past work to build a celebrity partnership.

“We believe that we have the know-how in the celebrity-sphere to build celebrity partnerships in the future,” Alhawamdeh said.

Almost all the creators have been moonlighting, investing their own money and making partnerships to bring the projects to life. None of these projects have launched yet but are expected to in the near future. The MetaSikhs collection of 2,112 NFTs was available for presale in December 2021, and was minted on Feb. 21, 2022.

In an environment where scam projects and rug pulls have occurred often, MetaSikhs promises to curate and grow the community by launching a companion collection.

The Kiddush Club is expected to announce a launch date for 3,600 mensches soon. They too plan new projects that would expand the existing community.

“We have been getting a lot of requests for female mensches, which we plan to launch as well in the near future. We really like the idea of having one big community with sub-communities within it,” Rebecca said

Anyone can buy the NFTs on any platform, even if, like the Hijabi Queens, some “encourage their NFT holders to seek value in our Muslim networking utility,” Alhawamdeh said.